Brian O’Driscoll plays well in the West End too 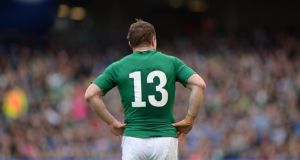 We’ll miss Brian O’Driscoll’s magic alright, and another win in Paris is the only fitting end. The real question is, what in hell are we going to do without him? Photograph: Dara Mac Dónaill/The Irish Times

So there we were looking at Ireland-Italy from the bowels of the West End theatre where yours truly is appearing in Conor McPherson’s The Weir and the thought struck me as I turned to my panel of experts (and fellow thespians) Ardal O’Hanlon and Peter McDonald: “Would Ireland have won so convincingly without your man, you know, the oldest fella on the pitch?”

Can it really be 14 years since his hat-trick in Paris? Looking like he’d just made his Confirmation, belting into cocky, suave French backs like Philippe Bernat-Salles, (he of the gray mane and permanently spotless jersey) as if posing the question “what are you going to do about me”?

He’s still asking the same question and here’s hoping on Saturday the French have a similar response.

Of course it all went haywire after that; the celebrity, the night life and that Robbie Savage hair-cut. What was he thinking there? He might have only been a pup back then, but that’s no excuse for going around looking like a Wham reject.

Wizardry
Some O’Driscoll magic was the only thing that could unlock the Italian defence last week. The “no-look” pass for Sexton’s opener, the dummy and basketball pass for Trimble’s score and the Harlem Globetrotter flick while being clobbered for Ireland’s fourth. Who will provide that wizardry when he’s gone? Mike Ross perhaps? You can do it Mike.

Not surprisingly, our producers have not prioritised the sporting interests of their actors and eight shows a week, including a 3pm matinee on Wednesday and Saturday, makes attending international rugby matches – except for Sundays – impossible. We do have understudies of course, but somehow the producers don’t see “heading off to Paris for Drico’s last hurrah” as a legitimate reason to abandon ship. (Hmmm, might give it a go, though).

I’ve often wondered what kind of people come to a play when Ireland are playing?The kind of people who don’t care about rugby and who pay my wages, presumably.

Anyway at 2.30pm last Saturday, we paused the iPlayer on Ardal’s laptop, crucially making sure we powered off all phones for fear of a stray text giving us the result. Then, matinee completed, Prêt à Manger salads on our laps, we watched, as Bill O’Herlihy might put it, “delayed, live” coverage of the real drama from Lansdowne Road.

While the result was well worth the wait, we did have to endure the BBC panel who would have you slack-jawed with boredom. Exchanges between John Inverdale and Jerry Guscott should be accompanied by a health warning, perhaps a crawling notice on the bottom of the screen “this will cause drowsiness”.

Apart from O’Driscoll there were other moments to savour, such as a prostrate Paul O’Connell being propositioned by Marco Bortolami.

The pushing, pulling, grappling and grabbing ended with the duo rolling around in a bizarre-looking “late night” cable TV wrestle, until Nigel Owens blew his whistle, presumably out of embarrassment for them.

Their scrumhalf Tito Tebaldi was the one Owens penalised for grabbing O’Connell around the neck, the number nine’s face grimacing with the strain of trying to make an impact on Ireland’s captain, who reacted like he was flicking away a mildly irritating gnat.

France are a very different proposition, with their monstrous pack, including the returning horse Louis Picamoles and their nippy outside backs, but mainly because of their unpredictable mental approach, which is, well, balloobas!

Stuttering
And while they might be stuttering and stalling in this Championship, they always seem to play their best rugby against Ireland in Paris.

However this is a different Ireland, with a solid set-piece, a weapon of a maul, the better half-backs and perhaps most crucially of all, they believe they can do it.

Can Ireland get this monkey off their back? Can they deliver and justify going to Paris as favourites (a first in my memory)?

Of course Ireland will be focused and will be prepared to play the match and not the occasion, but winning this one would go some way towards mending the heartbreak of losing to New Zealand.

No doubt they’ll put us through the ringer; there’ll be moments when we can barely watch. Indeed the theatre might well be the most appropriate place to watch.

And then we’ll say au revoir to a legend. Again!

It’s not easy saying goodbye to the man who, more than anyone else embodies a great generation of Irish players and a large dollop of sadness hangs over this weekend.

No question either O’Driscoll lives with the best there’s ever been and what joy it has been to witness. The hat-trick in Paris, that try for the Lions and the ’09 Grand Slam are the big ones, but it’s his talent, vision, anticipation, ability to create opportunities from nothing (mainly now for others), the moments of improvised magic you won’t find in any coaching manual and his extraordinary courage that set him apart. Yes, we’ll miss his magic alright, and another win in Paris is the only fitting end.

The real question is, what in hell are we going to do without him?