Angus Curtis following the family tradition but blazing his own trail 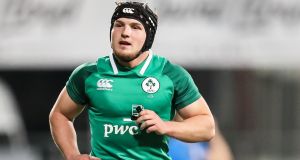 Ireland Under-20s’s Angus Curtis during his side’s victory over Italy. He says his side are still looking for a complete 80-minute performance. Photograph: Laszlo Geczo/Inpho

Ireland Under-20 international Angus Curtis comes from excellent rugby stock, his grandfather Arthur Bryan won three senior caps as a flanker in 1950, while his father David, born in Salisbury, Rhodesia (now Harare, Zimbabwe), made 13 appearances in the green jersey, several of which came in the 1991 Rugby World Cup.

Dave, a centre, won the vast majority of his caps alongside Brendan Mullin in the Irish midfield. He was a robust, tough-tackling player with superb distribution skills and was part of a trinity of players alongside Jim Staples and Simon Geoghegan that moved from London Irish and the Exiles set-up to Connacht.

While Ireland came within a couple of minutes of beating the eventual champions Australia in the 1991 World Cup, it wasn’t a great period generally speaking for the national side, reflected in the fact that Curtis finished on the winning side in just two of his 13 caps during a Test career that lasted a little over a year from February 1991 to March 1992.

Dave Curtis returned to Zimbabwe – he currently runs the Stables Winery in Harare – where Angus, and his brothers Graham and Simon were born, before being sent to the prestigious Hilton College in South Africa to be educated.

Angus, who is studying economics and finance at Queen’s University, has been joined by 18-year-old Graham, a scrumhalf, in the Ulster academy. Dave gave his boys a gentle nudge towards rugby but allowed them to develop their own enthusiasm for the sport and also who they chose to represent. Angus explained: “From a young age, he hasn’t forced me into it, but he’s kind of slowly guided me into it.

“He’s been out of the game for a long time but he’s always given me lots of support and my little brother, older brother, all of us have played rugby so it’s always been in the family. My dad played for Ireland so from a young age it was always in the back of my mind. You can’t really make a decision that early but at the end of school, my last year in Hilton was really good so I wanted to push on and give rugby a crack. It was then an easier decision to come over here.”

He finished school in November 2016 and linked with the Ulster academy in January of last year. Since his arrival, he has been on the national representative radar but it was in Ireland’s most recent Under-20 international, a 41-38 defeat to Wales at Donnybrook, that he demonstrated his prodigious potential. His footwork, strength lines of running and tackling marked him as Ireland’s outstanding player.

He wore the number 12 jersey as his father did in the past but his future could equally pan out in the outhalf role, his preferred position. His schooldays – he was at Hilton College from 14 to 18 years of age – prepared him for the rough and tumble of senior rugby.

Curtis admitted: “Schoolboy rugby in South Africa is really big and Hilton obviously prides themselves on their rugby and all their sports in general. The coaches there and the mentoring system, it is massive preparation for coming here.

“Physicality-wise, South African rugby players are big boys and there’s a massive emphasis on the physical side of the game. That did make coming over, especially going into club rugby and the next level of rugby, easier.

“Any time you get to put on your country’s jersey, it’s an awesome experience. Being in the [Under-20s] set-up, from the camps four months ago to the build-up [for the tournament and now playing two matches], to training with the seniors last week and doing it again this week, the exposure and the whole experience is awesome.”

The Irish Under-20s are still looking for a complete performance having lost to France and Wales and beaten Italy ahead of their final two matches against Scotland and England. Curtis explained: “We were good in the second half against France and the first half against Italy. We are yet to do a full 80-minute performance. “Our goal for Scotland now is to get a good week of training and then just do what we can. Hopefully when we come out then, we are happy with a full 80-minute performance.”

There is one further addendum to the Curtis-Mullin partnership of 1991 vintage in that Brendan’s son Gavin, played for the Irish 20s last year and David’s son, Angus, is replicating that achievement this season. So did David ever dust off any footage of him in action for Ireland?

Angus laughed: “He did but it’s all on video tape so we can’t watch it! Whenever it comes up on the TV he flippin’ calls all three of us in and says ‘watch how it’s done!’” On the evidence so far, the seed has taken root.