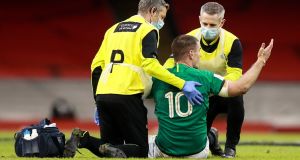 The neurologist who recommended that Johnny Sexton be stood down from rugby for 12 weeks in 2014, due to repeated brain injuries, believes that the Ireland captain has sustained “30 concussions”.

“Listen, I think Johnny Sexton has had around 30 concussions across his entire career,” Dr Jean-François Chermann told French radio station RMC. “It’s true that it’s enormous. But when he was playing for Racing he showed exceptional cognitive performance. So what is needed is that he knows what he is incurring to make the right decisions. I think that we can hear ‘Yes, I have a risk of developing a neurodegenerative pathology but I want to take that risk.’

“But we have to explain to him what that is. The doctor’s role is fundamental here, because if there are symptoms, if his tests are disturbed, the doctor must prevent him from playing on Sunday.”

Sexton and fellow Ireland captain James Ryan are going through World Rugby’s return to play protocols following head blows sustained during defeat to Wales last Sunday. Ireland play France in the second round of the Six Nations in Dublin this weekend.

“It’s a six stage set of protocols whereby each stage lasts about 24 hours and then if there are no symptoms resulting from the concussion, they can progress to the next stage,” said Ireland assistant coach Simon Easterby on Tuesday. “At the moment, they are going through that and there have been no setbacks so far.

“Our primary focus is their health and safety first and foremost. If a player, which may well be the case at some stage this week, feels like they can’t complete the stage that they are in, then they obviously have to drop back a stage and that compromises their availability.”