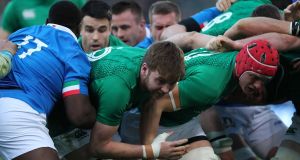 The Council of World Rugby will on Thursday ratify the recommendation by the global body’s Executive Committee that Regulation 9, governing the release of players for international rugby, will be extended on a one-off basis for the end-of-year return of Test matches.

This temporarily extended window will run from October 24th until December 5th in Europe, and incorporate a rest weekend around November 7th. The ratification by the Council is not in itself remotely earth-shattering, but it does mark a fairly momentous day in that it confirms the planned return for international rugby, something which looked a bleak enough prospect in the early months of the Covid-19 pandemic.

Following on from the postponement of the Guinness 2020 Six Nations game between Ireland and Italy in Dublin on March 7th and then the final round of matches a week later, like much else the remaining elements of the 2019-20 season fell like dominoes.

The summer tours by the northern hemisphere teams to the south were called off, as have been the planned return visits this coming November, due to the travel restrictions caused by the coronavirus pandemic.

This window will now accommodate the postponed men’s and women’s Six Nations matches at the end of October, and a programme of international matches involving the Six Nations, Japan and Fiji from 14 November 14th through to December 5th.

The temporary extension of Regulation 9 will run until December 12th in the southern hemisphere so as to accommodate a revised and truncated Rugby Championship to be held over six weeks in New Zealand.

Plans are already in the making for November matches in Europe, with Ireland playing three tests against group rivals Wales, England and Fiji, while France, Italy, Scotland and Japan are in the other pool, before a final round of playoff deciders.

However, until the Council formalises the temporary extension of Regulation 9, the respective unions and federations could not make public their plans. So it was that the Japanese Union said they could not yet confirm the presence of the Brave Blossoms in Europe this November, but there’s no doubting they will be taking part.

Dates and kick-off times for this one-off eight-team tournament are not expected to be announced until late August, but the re-arranged Six Nations games will probably be confirmed next week, with Ireland hosting Italy at the Aviva Stadium on October 24th. This will be followed by the fifth found of games on October 31st.

Although both the English and French clubs have opposed the extension of Regulation 9 and the latter may be the more trenchant in its response, they know it is a fait accompli at this stage.