All Blacks back where they belong 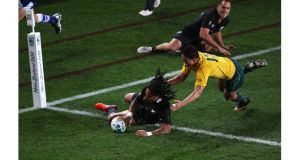 Ma'a Nonu of the All Blacks slides over to score the only try of the semi-final against Australia despite the tackle from Anthony Fainga'a at Eden Park on October 16th, 2011 in Auckland, New Zealand. - (Photograph: Alex Livesey/Getty Images)

New Zealand 20 Australia 6:A dominant all-round display helped New Zealand book their place in the Rugby World Cup final as they saw off Australia 20-6. The All Blacks overcame the massive weight of expectation placed on them and never looked back from Ma'a Nonu's early try.

Piri Weepu's 12 points and Aaron Cruden's drop-goal kept New Zealand in front throughout, although it was the immense effort in defence - led by the awesome Richie McCaw - that broke the Wallabies.

Israel Dagg, Cory Jane and Nonu also caught the eye in attack, while the pack were on top at the breakdown.

Australia were not helped by an off-night from Quade Cooper, who was specifically targeted by the hosts, and some ill-discipline, while they were left frustrated in attack.

James O'Connor and a Cooper drop-goal was the best that they could manage as they failed to break the solid black wall.

The All Blacks were rewarded for blistering start as Dagg's sublime run set up Nonu for the try after five minutes. The full-back handed off Rocky Elsom before offloading to Nonu just before he was bundled into touch.

Weepu missed the conversion and then hit the post with a simple penalty shot - however he settled his nerves on 13 minutes after Pocock was penalised for hands in the ruck.

Australia hit back immediately when Pocock's openside rival McCaw was pinged and O'Connor made no mistake.

But although Weepu missed another regulation effort at the sticks, the pressure on Australia told as Cruden slotted over a drop-goal to back it 11-3.

Cooper cut the deficit to six points with a well-struck drop-goal on 32 minutes as Australia enjoyed a rare spell of pressure in the New Zealand 22 - but Weepu responded with a penalty in front of the posts just before the break.

Weepu gave the All Blacks some breathing space a minute after the restart with his third successful penalty - however, he was off-target on 56 minutes, while Cruden also failed to put the game out of sight.

Australia, though, just couldn't find any way back into the contest - and Weepu, back on as a blood replacement, put New Zealand 14 points clear with nine minutes left.

Sonny Bill Williams was on for just three minutes before he was sin-binned for a dangerous tackle on Cooper - but New Zealand shut up shop with some stunning defence.

2 Owen Doyle: IRFU should be encouraging representation for Irish referees

Allardyce angry with VAR after ‘human error’ denies another goal 08:46
Six Nations and Leinster trips to proceed; Robinson on target in West Brom win 07:25
Bernard Flynn believes Dessie Farrell will regret Dublin’s lockdown training session 07:00
Different Strokes: Glass half full for Shane Lowry after best Masters finish to date 06:00
Rhys McClenaghan: ‘It would be almost silly not to aim for gold every time’ 06:00
Crossword Get access to over 6,000 interactive crosswords