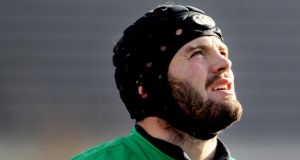 David Gannon is one of a number of Irish natives expected to play for US Eagles. Photograph: Inpho.

Some wild geese may not be returning. There is a gaggle of them playing rugby on the American collegiate circuit and former Blackrock outhalf (sometimes scrumhalf) AJ MacGinty is making such an impact that the US Eagles may naturalise him ahead of next year’s world cup.

“They’ve only played two matches but Life [University] already look like they will be hard to beat in the American Rugby Premiership,” thisisamericanrugby.com reported.

“They narrowly beat NYAC and then rolled over Boston last weekend and the biggest reason for their success this year has been the play of outhalf AJ MacGinty. Against Boston he scored two tries, set up several others, made four conversions, and three penalties.

So good they envisage him being capped in 2015.

“MacGinty becomes US eligible in January, it’s highly likely that he’ll be called into Eagles camp immediately and could very well be the starting flyhalf for the team in the World Cup.”

MacGinty isn’t the only Irish man with the “Running Eagles” as he is joined by David Gannon, the former Ireland under-21s captain who since leaving these shores – after stints with Leinster and Connacht – also played professionally in New Zealand.

Marcus Walsh, the former Connacht scrumhalf, is competing for the number-nine jersey with Ulster’s Blane McIlroy.

Dylan Fawsitt and Neil McMillan are two more professionals earning their keep across the Atlantic.

Then there is Greg McWilliams, the Ireland women’s assistant coach until last month, who just took over the rugby programme at Yale University.

“If anyone thinks we are going away they have another thing coming,” said O’Shea, just to reinforce their credentials as English Premiership title contenders despite a three-from-five win start to the campaign.

On the playing front, two of Ulster’s exiled men – Ian Whitten and Gareth Steenson – featured yesterday for Exeter against Newcastle with Whitten getting a rare run in his preferred inside centre role for the English side.

Former Ireland scrumhalf Tomás O’Leary and Tom Court started for London Irish in the 19-12 defeat to Northampton with Eamonn Sheridan coming off the bench.