World’s number one golfer worth €52 million, according to ‘Sunday Times’ rich list 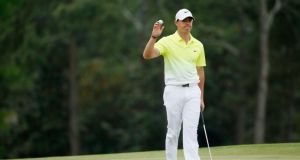 He’s got the world number-one spot, four Majors and counting, and now Rory McIlroy can add the title of Ireland’s richest sportsman to his burgeoning CV, according to the Sunday Times rich list 2015.

A barnstorming 2014 saw McIlroy lift the British Open and US Open championships, as well as helping Europe to victory in the Ryder Cup and cementing his status as the world’s best golfer.

His success on the course has been matched off it, with his earnings from competition and a whopping sponsorship deal with Nike seeing his wealth rise to €52 million, a €14 million increase on the previous 12 months.

This comes despite McIlroy’s dispute with his former management company, leading to a settlement that cost a one-off fee of €25 million.

McIlroy’s rise in earnings has knocked Pádraig Harrington into second spot by a whisker. The Dubliner is worth €51 million, a figure boosted by victory in the Honda Classic last month.

He may have canned his job as the assistant manager of Aston Villa and knocked the majority of his punditry work on the head, but Roy Keane is still in third place in the list with €40 million, a result of his past as Manchester United’s captain and his current role as Martin O’Neill’s number two.

AP McCoy’s long farewell comes to an end at Sandown today with his final ride on Box Office, bringing the greatest jump-jockey career of all to an end. It has been rewarding, with McCoy sitting alongside O’Neill in eighth.

McCoy is the only sportsman on the list who hasn’t made his fortune through golf or soccer, with Graeme McDowell and Darren Clarke in fourth and seventh spots, while Ireland’s all-time top scorer, Robbie Keane, and Melbourne City’s Damien Duff are fifth and sixth respectively.

The Irish rich list names the country’s top 250 earners in all walks of life. Currently, there are no Irish sportswomen on the list.

1 Gordon D’Arcy: If South Africa moves up north, it could all go south
2 Charlesland Golf Club set to close permanently in December
3 When Down’s 1960 All-Ireland victory brought down barriers
4 Dundalk versus KÍ in the Europa League: TV details, kick-off time and more
5 Tour de France: Every yellow jersey winner must feel guilty by some association
Real news has value SUBSCRIBE
Here is your handy guide to sport on television this week