Roddy L’Estrange: Twists and turns on a not so great Dublin bike ride 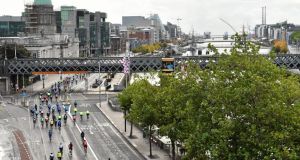 After turning left off the Rathbeale Road, it struck Vinny Fitzpatrick that he was alone. He was the solitary cyclist, like the chap in the Arthur Conan Doyle short story, which so puzzled Sherlock Holmes.

At this ungodly Sunday hour, there wasn’t a soul about in faraway Fingal, and the only sound Vinny could hear was the gentle whoosh of his chain as he pedalled along roads uncharted, even by Dublin Bus.

Against the odds, he was at the head of the Great Dublin Bike peloton which numbered 3,267, including celebs such as Ray D’Arcy, and his stumpy 57-year-old pins were pumping like pistons.

That Vinny was further up the road than anyone else was due to the sneaky short-cut he’d taken a few minutes earlier.

Instead of following the Vernon Velo crew, led by Belgian waffler Hervé , in the direction of Ballyboughal along with all the riders on the 100km circuit, Vinny touched the brakes and veered left at a Y-junction towards the city.

He was now on the shorter course and riding solo, for the 60km riders had started 15 minutes behind the 100km crew and hadn’t hit the outskirts of Swords yet. For the moment, Vinny was king of the road.

After crossing a fine bridge, Vinny saw a sign for Toberburr, which he knew was served by the 40B.

“A bus, a bus, my kingdom for a bus. The race must be heading that way,” he thought as he peeled instinctively to his right.

He made a note to apply the brakes at three bars . . . unless offered more.

After a bit, a quick squint at the tracker computer on his handle-bars sowed the first seeds of uncertainty. He’d covered 40kms and hadn’t seen sight of the road-side nose bag. “Maybe I’m so far ahead, things aren’t set up yet,” he thought.

A couple of leafy bends later, it struck Vinny that he hadn’t seen any out-riders, marshals, direction signs or volunteer sentries at any junction.

By now, the road surface was becoming increasingly rough, and brambles were encroaching from either flank.

It had just started to rain when a muscular blur sped past Vinny, at a fair lick.

“Keep her lit, son,” cried a relieved Vinny. A moment later, two toned female riders, came up alongside, stared at the beefy busman and then kicked on in silence.

Looking over his shoulder, Vinny spied a bead of cyclists strung out along the narrow road.

“Good to have company,” he thought.

After latching on to a vet who wore a banner on his back “Mick ‘Iron Man’ Murphy RIP”, Vinny flexed his legs and felt his blood flow.

“Not long now to the granolas,” he said to himself.

The aul fella with the Mick Murphy tunic took off his helmet and pointed angrily at Vinny. “You should know, you’re the one who started it all we all.”

As stony-faced riders muttered about following the bike in front, soon all eyes were on Vinny who felt his stomach sink. It was clear he had been identified as the Pied Piper of the Fingal peloton. As a professional navigator, he felt ashamed.

“I must apologise,” he said, raising a hand. “It seems I may have taken my eye off the road. The least I can do is get us back on the right track. I have a fair idea which way we came. We’ll be like Hansel and Gretel retracing our steps through the woods.”

At that, Mick Murphy man scowled: “Only thanks to you, we’ve no bloody bread.”

Vinny winced. “Right, let’s saddle up. I’ll have youse back in a jiffy,” he said.

As the rain teemed down, the sodden caravan crawled along leafy lanes and bygone byways with a roly-poly figure as the spearhead. “Can’t you go any faster?” hissed one of the riders.

He couldn’t get over how vast and isolated Fingal was. The Great Bike Ride had morphed into the Great Bike Hide. “Where the heck are we?” he thought.

And then, the boreen cut across a road with white markings on it and Vinny felt his heart lift. “We’re nearly there, folks,” he cried aloud.

“Excuse me,” said Vinny, tapping the volunteer on the back. “We would like to rejoin the race.”

The helper turned, glanced at “Team Vinny” and shrugged: “You’d better get your skates on. I’m waiting for the broom wagon to go past and then I’m off home.”

At that, there was a fierce scatter as pedals whirled. “You’ve brought us further away from the finish, you gombeen,” spat Mick Murphy man.

Vinny saw approaching lights and heard the engine of the broom wagon, which scooped up the also-rans and their bikes.

For a kilometre or two, the fear of a Did Not Finish label spurred him on but his spirit was sapped and his legs soon buckled.

Helmet bowed, Vinny pulled his bike to one side, and stuck out a thumb. When the passenger door opened, he said meekly: “Single to the city centre, please.”