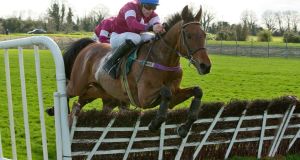 Davy Russell onboard Valseur Lido, who is a possible for the Becher Chase. Photograph: Morgan Treacy/Inpho

Willie Mullins has indicated Djakadam is likely to return to action in this Sunday’s John Durkan Memorial Chase and the Cheltenham Gold Cup runner-up is already favourite for Punchestown’s Grade One highlight.

News that Road To Riches will wait for Christmas, and probably a defence of his Lexus Chase title, prompted Paddy Power to make Djakadam a 6/4 favourite to secure a maiden top-flight success at the weekend.

Arctic Fire, runner up in last season’s Champion Hurdle, notched a first Grade One victory in Sunday’s Hatton’s Grace Hurdle and the Gold Cup second is set to try to do the same.

“Djakadam will probably start out in the Durkan, I would imagine,” said owner Rich Ricci. “Then it could be the Lexus, then maybe what was the Irish Hennessy and then maybe the Gold Cup, who knows?”

Djakadam graduated from landing the Thyestes handicap chase off topweight to finishing best of the rest behind Coneygree in the Gold Cup, before winding up last season at Punchestown behind Don Cossack.

Ricci and Mullins won the Durkan in 2013 with Arvika Ligeonniere and the champion trainer may have another string to his bow on Sunday with Valseur Lido a 4/1 joint second-favourite with Gilgamboa. However, Valseur Lido is also a possible for the Becher Chase over the Grand National fences at Aintree on Saturday.

Tuesday’s five-day stage will see the shape of the €85,000 Durkan clarify but neither Road To Riches or Apache Stronghold will be among the entries left in.

“Apache Stronghold won’t run. He just had a very slight setback, so we’ll look towards Christmas for him now,” trainer Noel Meade reported.

“Road To Riches will be out over Christmas somewhere as well, hopefully. We’ll see where we go nearer the time.”

Meade hopes to run Sunday’s Drinmore runner-up Monksland in Leopardstown’s Neville Hotel’s Novice Chase over Christmas. The former high-class hurdler was second to the RSA favourite No More Heroes at the weekend.

“He ran well. He’ll be better over a bit further and hopefully we can keep him right, that’s the main thing with him,” Meade said. “All going well, we’ll look to go to Leopardstown over Christmas, back over three miles.”