Willie Mullins has strong hand for Betfair Hurdle at Newbury

Dicosimo, Kalkir and Petite Parisienne all remain among entries at five-day stage 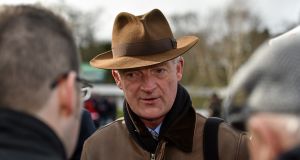 Willie Mullins has seven entries in the Betfair Hurdle at Newbury. Photograph: Sportsfile

Willie Mullins has a strong-hand at the five-day stage of the Betfair Hurdle at Newbury with four of the top six in the weights from 31 to stand their ground.

Despite taking out Sempre Medici, Mullins has left in Dicosimo, Kalkir, Ivan Grozny, Petite Parisienne, Buiseness Sivola, Noble Inn and Whiteout. Saturday’s impressive Leopardstown winner Blazer has also been left in, but is unlikely to make the cut.

Philip Hobbs’ War Sound has been well-backed and remains in the mix, along with stablemate Sternrubin, who dead-heated for the Ladbroke, and top-weight Cheltenian.

Noel Meade’s Waxies Dargle is a regular in the big handicaps for owner JP McManus, who has another strong fancy in Paul Nicholls’ Modus.

John Ferguson can choose from Qewy and Three Kingdoms, while Dan Skelton has the option of running Fou Et Sage and Zarib.

Affaire d’Honneur, Winner Massagot, John Constable, Montbazon and Agrapart are others of note.

Starchitect, decent for Donald McCain last season, could have his first outing for David Pipe.

Richard Johnson expects to maintain his successful link with Sternrubin out of the Hobbs trio.

Speaking in his Betway blog, the champion-elect said: “I imagine I’ll be riding Sternrubin in the big handicap hurdle.

“This hasn’t been confirmed with Philip yet, but I presume I’ll be on Sternrubin, Ciaran (Gethings) will continue on War Sound and Tom (O’Brien) will be on Cheltenian.

“Obviously anything can happen, but at this stage that’s how it looks.

“In any case, I think all three will go there with solid claims. Sternrubin won at Newbury earlier this season and did really well at Ascot last time.

“War Sound won the Swinton on his last start, while Cheltenian put up a good show at Cheltenham last time.

“It’s one of the hottest handicaps of the season and I’m sure it will be very competitive again on Saturday.”