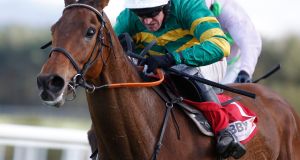 Willie Mullins isn’t in a position to emulate his remarkable 2015 haul of 10 Grade One prizes at the Punchestown festival. But Wednesday’s top-flight double with Bellshill and Blow By Blow will boost the champion trainer’s confidence for the week ahead.

The variable impact of trying to take in both Cheltenham and Aintree before coming to Punchestown has been a major narrative through the week and Mullins took Annie Power out of tomorrow’s Betdaq Champion Hurdle after being less than 100 per cent happy with her work.

However, proof that a busy workload prior to this week isn’t an automatic hindrance came when Bellshill secured a Grade One Punchestown festival prize for the second year running in the Irish Daily Mirror Novice Hurdle.

In 2015 Bellshill was beaten at both cross-channel festivals before landing the Champion Bumper here and pulled off the same trick with a doughty half-length defeat of Coney Island. He also gave Ruby Walsh a first 2016 festival victory.

“I thought it was a brave ride by Ruby. He had a lot of ground to make up at the stone wall but sat and sat, hoping they’d gone too fast,” Mullins said. “If he’d been beaten, he’d have been slated by everyone – me included!”

Owner Graham Wylie’s initial desire to aim for next year’s World Hurdle with Bellshill could wind up trumped by the champion trainer’s desire to send Bellshill over fences. He is already 14/1 for the 2017 RSA at Cheltenham.

Walsh’s sister, Katie, has tasted Cheltenham festival and Irish Grand National success in a notable big-race CV but she plugged a Grade One gap with Blow By Blow’s all-the-way win in the Attheraces Champion Flat Race.

Originally down to ride the non-runner Battleford, Walsh replaced Sonny Carey on Blow By Blow, who repelled Moon Racer’s challenge up the straight.

“I was meant to ride Battleford, who was second at Cheltenham and second in Aintree, but things got swapped around this morning.

“I was half-tempted to ride Very Much So, but Willie told me to ride Blow By Blow and I think he knows more about it than anyone else. I’m delighted to be on the right one,” said Walsh who got a one-day ban for her use of the whip.

“He’s as tough as nails and I was looking for company. Patrick [Mullins] told me not to be afraid to wind it up. It’s great to win a Grade One – I’ve never won before – so I’m massively over the moon,” she added.

Mullins is already considering next season’s Albert Bartlett as a long-term target for Blow By Blow, who was Gigginstown Stud’s first winner of the week.

“It takes a fair stayer to do what he did. I thought they were going a bit quick in front and it looked like Moon Racer came there to win. Katie was very good and very strong,” Mullins said.

Augusta Kate brought up the Mullins hat-trick in the Listed mares bumper, the complexion of which was transformed when The Nipper ran out and unshipped Nina Carberry at halfway. Augusta Kate eventually overhauled Forge Meadow to leave her trainer thinking ahead.

“Big plans, we could look at the mares novice hurdle at Cheltenham next season, and maybe the mares hurdle itself the following year,” he said. “Augusta Kate does what she does and I don’t know how because she doesn’t do it at home.”

Off the track since January, a wind operation in the interim looked to significantly boost Woodland Opera’s form as he proved much too strong for his opposition in the closing stages of the conditions hurdle.

With the favourite Supasundae fading to fourth, Robbie Power produced Woodland Opera at the last to continue Jessica Harrington’s run of form in the last week.

“He had a wind operation after Leopardstown and, touch wood, it seems to have worked,” the trainer said.

Shamiran won the Opportunity Series Hurdle Final for the third time, holding off the favourite Go Darsi Go by a head under Niall Kelly, to follow up his victories in 2012 and last year.

“The ground is the key to him as he wasn’t able to handle it over the winter,” said trainer Dermot McLoughlin. “He enjoyed himself, travelled and jumped well. Once he has that ground he can mix it between hurdles and fences.”