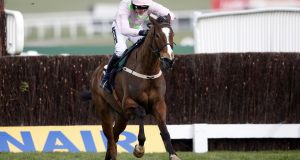 Bookmakers appear divided about whether or not Ruby Walsh will ride Vautour in the Cheltenham Gold Cup as the ten-times champion jockey closes in on a century of winners in Ireland this season.

Walsh is currently on 98 winners after an already hugely successful campaign and will have four opportunities at Naas on Sunday to reach the 100.

They include the Rich Ricci owned pair, Royal Caviar and Bamako Moriviere, but it is Ricci’s two Gold Cup hopes, Vautour and Djakadam, who are concentrating most minds ahead of Friday week’s ‘blue riband.’

With Ricci ruling out any idea of Vautour switching to the Ryanair Chase, some layers reckon it is a done-deal that Walsh will keep faith with last year’s spectacular JLT winner and Coral make it 2-5 about Walsh riding Vautour.

However Paddy Power can’t split the pair, making it 5-6 each about Walsh riding and the jockey reported during the week: “They will work in the Curragh seven days before the Gold Cup and how they work that day will probably decide which I ride.”

Bryan Cooper faces his own Gold Cup dilemma, choosing between the Gigginstown pair, Don Cossack and Don Poli, and has five Naas rides on Sunday for his boss, Michael O’Leary.

Cooper trails Walsh by a dozen in the season’s jockeys standings but will fancy his chances of narrowing that gap this weekend, including possibly on Nickname Exit in the featured E50,000 Woodlands Leinster National.

The six year old doesn’t do much very quickly but the premium will be on stamina in this three mile event and Nickname Exit goes to Naas on the back of a good win over hurdles at Navan last month.

He was put up a stone for a facile handicap win at the same track in December and although subsequently pulled up in the Thyestes looks worth another chance in a competitive heat.

Cooper picked Rule The World from a Gigginstown trio in the Grade 3 novice chase - leaving Walsh to pick up the mount on Tell Us More – and he will be hoping it proves ‘Lucky 13’ for his mount.

Rule The World has failed to score in a dozen starts to date over fences but has exhibited a decent level of form throughout, including finishing runner up on seven occasions.

Cooper has picked the Thurles winner Burgas over Attribution in the opening Listed novice hurdle in which Walsh is on board Royal Caviar.

Both Attribution and Gurteen represent form lines with the hot Supreme favourite Min but it is Gurteen who looks the most progressive even if very testing conditions aren’t ideal.

Jonathan Burke makes his comeback from injury on the Aintree hope Goonyella in the Leinster National, six weeks after injurying his neck at Thurles. It is a welcome return to action for the 19 year old jockey who’s Cheltenham festival rides include Supasundae in the opening Supreme Novices Hurdle.

“I started riding out again Wednesday last week and I schooled a couple around Leopardstown at the weekend. We’ve galloped all our main Cheltenham hopes with Henry De Bromhead so it is all systems go,” Burke said.