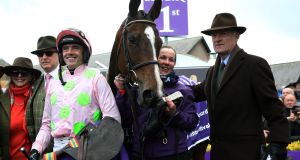 Vroum Vroum Mag had Punchestown festival punters ‘va-va- vooming’ towards their bookmakers after the late substitute for Annie Power in the Betdaq Champion Hurdle rewarded supporters in style yesterday.

The heavily backed 4-6 favourite was labelled a “super- duper-sub” by owner Rich Ricci, who proclaimed Willie Mullins a “genius” following the champion trainer’s decision to replace the Cheltenham and Aintree heroine Annie Power in the €200,000 feature with her younger stable companion.

There weren’t many disagreeing with the American, as Mullins brought his tally for the festival week so far to nine with a day four hat-trick completed by Avant Tout and Koshari.

The headline act, however, was Vroum Vroum Mag, now unbeaten in 10 starts for Mullins, and the racing world looks to be her oyster after making as much light of her first Grade One clash against males as she did the drop back to two miles.

“We are not afraid to change plans and adapt on the day,” said Mullins, outlining how Annie Power’s absence resulted in Vroum Vroum Mag being switched from Thursday’s three- mile highlight, and how many options over hurdles and fences await her next season.

It was a third Grade One winner of the week for Ruby Walsh, who has confined himself to the top-flight races after returning from a wrist injury.

“It just shows the strength in depth we are lucky enough to have. At the start of the year Nichols Canyon, Arctic Fire and Faugheen looked our main ones and we’ve ended up winning the Champion Hurdle with Annie Power and here with Vroum Vroum Mag,” Walsh said.

“She’s quick enough to run in the Champion Hurdle or she could go over fences. She’s so relaxed she will stay as well. We’ve just climbed the ladder with her, but the couple of times we’ve run her at two miles have been her most impressive wins,” he added.

There was no doubting the “Girl Power” theme on Ladies Day as the 11-8 favourite Jer’s Girl also put the boys firmly in their place, running out a resounding winner of the Tattersalls Champion Novice Hurdle.

The Gavin Cromwell-trained four-year-old took full advantage of all the age and sex allowances to win by 10 lengths, completing back-to-back Grade One victories for owner JP McManus, who bought her prior to Easter.

“It was a bit of a step into the unknown against the geldings, even though she was getting the weight allowances, but she’s all heart,” Cromwell said.

“I knew she had improved since Fairyhouse and I’d say she will stay three miles in time.”

Jer’s Girl is as low as 7-1 for next season’s OLBG Hurdle, the Cheltenham festival race won by Vroum Vroum Mag last month.

McManus has enjoyed a notably good week, including landing Wednesday’s Gold Cup with Carlingford Lough, but there’s no disputing the most widely popular and emotional of his eight winners this week was On The Fringe.

Nina Carberry’s mount brought up the Cheltenham-Aintree-Punchestown Hunters Chase hat-trick for second year in a row, thrilling the 29,419 strong crowd, and leaving Enda Bolger in tears.