Vinny the would-be Bogart fluffs his lines on racecourse rendezvous 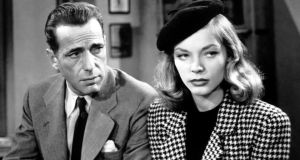 Vinny and Ms Mysterious found they shared a passion for the movies of Humphrey Bogart and Lauren Bacall. Photograph: Silver Screen Collection/Getty Images

Heading for the rendezvous at the entrance to the Bobbyjo Bistro in Fairyhouse, the few hairs on the back of Vinny Fitzpatrick’s neck stiffened, and a shiver rattled his spine, even though it was a glorious Easter Monday.

The meeting point, with the woman he’d daubed“Ms Mysterious”, had been arranged via an exchange of emails on foot of the intriguing message left in the collection box at St Gabriel’s for his eyes only.

The online exchanges had been pleasant, civilised, and not in any way racy, which Vinny felt was probably a good thing, as he didn’t think he could cope with a headstrong filly.

If the relationship was to progress at a genteel canter rather than a flaying gallop, that was dandy by him.

As he pushed open the doors at the top of the stairs, one thing nagged Vinny slightly. Ms Mysterious had yet to furnish any photo of herself, which prompted Vinny to fear he was being saddled for a set-up.

“This is just the sort of prank the lads would come up with,” he said to himself as he took his position by the Bobbyjo Bistro door.

He checked his watch, and noted he was on time for the appointment, half an hour before the National.

And then, he saw her.

Across the foyer was a middle-aged woman clutching a race programme, and looking about her nervously.

She was petite, in her 50s, tanned with close-cropped grey hair, almost white, and looked the part in a cream dress.

It was time to raise the white flag and come under starter’s orders through the pre-arranged coded message.

This came about during the email chatter, when Vinny and Ms Mysterious found they shared a passion for the movies of Humphrey Bogart and Lauren Bacall.

It was agreed Vinny would initiate the conversation with a scene-grabbing line from To Have And Have Not.

In four steps, he was across the foyer, planted himself directly in front of his fellow race-goer and went for broke.

“Good day,” said Vinny cheerily. “You know how to whistle, don’t you?”

Undeterred, the busman cleared his throat and repeated his line. “Perhaps I didn’t make myself clear. You know how to whistle don’t you?” he said a second time.

The woman blinked, blushed slightly and replied,“Actually I do. You just put your lips together and blow.”

At that, Vinny puffed out his cheeks and felt his body sag from within. “Phew,” he said. “For a moment there, I figured I’d taken the wrong course.

“Lovely to meet you. I’m Vinny Fitzpatrick, from Clontarf,” he said, thrusting out a meaty paw.

“Er, hello. I’m Una O’Driscoll from Clonakilty. Do I know you?” she said, offering a timid hand.

“Yes and no,” blathered Vinny, unaware of the clouds scudding across his romantic sky. “We’ve been interacting online all week,” he grinned.

At that, Una O’Driscoll raised her left hand, upon which Vinny spied a wedding ring and said sternly, “I think you may have backed the wrong horse here, Mr Fitzpatrick. I’m due to meet my sister and her husband here.

“There’s my sister now. If you don’t mind, I’ll take my leave. Good day to you, Mr. Fitzpatrick.”

“I’m the gombeen of all gombeens,” Vinny said aloud, reaching out for a discarded McCoy mask and slipping it on. “Best that no one sees me,” he thought to himself.

It struck Vinny that he hadn’t placed a bet on the big race. He ran a pudgy finger down the card, considered his recent mortification and picked out Thunder And Roses, number 13: “It has to be lucky for some.”

As the last of the 28 runners left the parade ring, Vinny felt a light tap on his shoulder and a voice by his ear. “You know how to whistle, don’t you?”

With that, Vinny turned, he saw and his heart took a wee flutter. “You just put your lips together and blow,” he croaked from behind his mask.