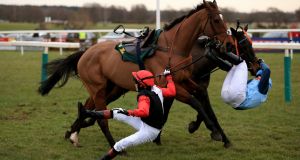 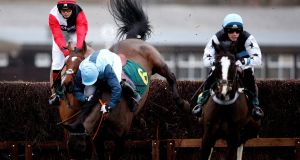 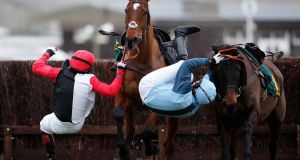 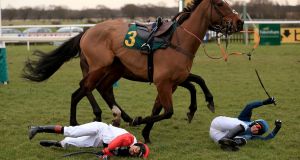 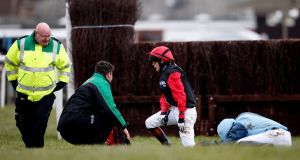 Victoria Pendleton gets back to her feet while fellow jockey Carey Williamson gathers her senses following their falls at Fakenham. Photograph: Alan Crowhurst/Getty Images

Victoria Pendleton was unseated on her first ride over regulation fences in the Betfair Switching Saddles “Grassroots” Fox Hunters’ Chase at Fakenham.

The dual Olympic champion cyclist was riding the nine-year-old Pacha Du Polder for a second time, with the pair having been beaten in a photo-finish at Milborne St Andrew point-to-point in late January.

The Paul Nicholls-trained gelding was the 8-13 favourite for this three-mile contest and Pendleton gave her mount time to find his feet, initially dropping him out at the rear of the six-runner field.

Pacha Du Polder gradually warmed to his task and was moving closer to the leaders when he was slightly impeded by Baltic Blue at the seventh fence.

Pendleton and Baltic Blue’s rider Carey Williamson crashed to the ground, but both riders were soon on their feet.

The race was won by Vasco Du Mee.

Pendleton, 35, said she has escaped injury and that she still wants to ride Pacha Du Polder at the Cheltenham Festival.

She said: “I hope Cheltenham is still the plan. Hopefully I’ll get another opportunity to sit on him, and get as many rides in as possible between now and then.

"That's racing but it's onwards and upwards." Victoria Pendleton was upbeat despite unseating on Pacha Du Polder https://t.co/ZfVXelfqzM

“It’s up to the team of experts to decide whether I’m ready for Cheltenham – I hope I am.

“I appreciate this is what happens, and it was going to happen sooner or later.

“I’ve had a good run, I’ve not had a fall until now really.

“More than anything it’s a bruised ego but it won’t put me off.

“I’m very disappointed I didn’t given him a fair shot. He was an odds-on favourite and it was a disappointing job from me, I think.

“I think the horse next to me (Baltic Blue) propped in and as we both came over together he sort of knocked me to one side.

“I didn’t have four feet on the ground and I came out the side door.

“It’s one of those things, it’s racing – it’s what happens.

“It doesn’t always go to plan and it’s onwards and upwards.”

Pendleton announced last March that she was embarking on the Betfair-backed ‘Switching Saddles’ challenge to make the transition from velodrome to racecourse, with the ultimate aim of riding at the Cheltenham Festival.

She came close to making a dream debut under Rules after finishing second, beaten just a head, aboard Royal Etiquette on her first ride as a fully-fledged amateur at Ripon in August.

She turned her attentions to the jumping game in the autumn, riding in several point-to-points before making her debut under National Hunt Rules at Fakenham.

Pacha Du Polder, who carries the colours of leading owners the Stewart family and finished second over the Grand National fences in the Fox Hunters’ Chase at Aintree last term, had already been earmarked as Pendleton’s intended Festival ride in the St James’s Place Foxhunter Chase on March 18th.