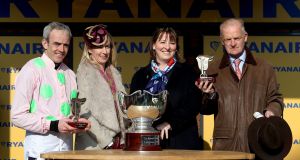 Willie Mullins’ ambition to become the first Irishman to win the British trainers’ championship since Vincent O’Brien 62 years ago could hinge on next week’s Aintree festival and Vautour is among the Closutton heavy-guns in line to be sent to Liverpool.

Vautour is already as low as 1-3 favourite in some ante-post lists for the Grade One Melling Chase over two and a half miles on Day 2 and Mullins has confirmed he is weighing up the contest as an option for the controversial Ryanair winner.

“He will certainly be entered for that race and I’m not ruling anything out for him,” said Mullins who has a tenth championship at home long since wrapped up but who also has the British title in his sights after another hugely successful Cheltenham festival.

“We are in with a realistic shot at it. Everything will have to go really right for us. But if things do go right for us over Aintree then it is certainly a possibility,” Mullins said.

Evidence that the Irishman is likely to concentrate on Liverpool more than before could be especially evident on Day One of the Grand National festival with both Annie Power and Nichols Canyon dominating betting on the Aintree Hurdle, and Don Poli in line to take on Cue Card in the Aintree Bowl.

“Don Poli is fit and well since his run in the Gold Cup. He has won at the track before and will be entered for that race,” said Mullins. Don Poli is currently a 5-1 shot in betting lists behind the odds-on Cue Card.

Ultimately the destination of the trainer’s championship may depend on the Grand National itself, a race for which Mullins is planning to send four horses, including the former Cheltenham Gold Cup runner -up, Sir Des Champs.

“He must be well handicapped on his best form and the plan is to run him, On His Own, Boston Bob and Ballycasey in the National,” said Mullins who won the National in 2005 with Hedgehunter.

Sir Des Champs is among a strong team of Gigginstown Stud horses being aimed at the National, a team set to include First Lieutenant and Rule The World from Mouse Morris’s yard, although unlikely to have Monday’s Irish National hero, Rogue Angel, among them.

“I don’t think he’ll go to Aintree. I wouldn’t rule it out, but I don’t think he’d even get in. We’ll probably look at the Scottish National or Punchestown, but I’ll speak to the lads (Michael and Eddie O’Leary) and see what they want to do,” said Morris who indicated Gigginstown’s No.1 rider Bryan Cooper is likely to ride First Lieutenant in the big race with Nina Carberry a possible to ride Rule The World.

“Rule The World and First Lieutenant will run, as long as we can keep them sound. Bryan Cooper is going to ride First Lieutenant. I don’t know who will ride the other horse yet, I’ll need to speak to Michael and Eddie, but she (Carberry) would be on the list,” he added.

Bryan Cooper will be on duty for four rides at Downpatrick today and his best chance of a winner could ironically be the one non-Gigginstown candidate.

Cooper teams up with the course winner Le Grand Chene for Gordon Elliott in the handicap chase and although the trip may be short of the horse’s best he looks the best of an ordinary lot.

Aminabad was once a decent novice hurdler but could be vulnerable in the Beginners Chase and better ground could be important to the former point to point winner Buck Dancing.

Buyer Beware has a first start for Elliott in the opening maiden hurdle and a replication of his jumping debut at Thurles last October should make him difficult to beat.