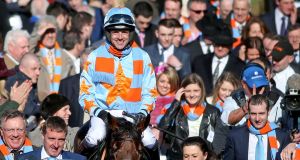 Ruby Walsh has been a statistical focus this week in terms of career winners and will hope a 10th Grade One winner of the season will come his way aboard Un De Sceaux at Ascot today.

There appears to remain some debate as to whether Walsh exactly passed 2,500 winners during the week but perhaps the most pertinent stat ahead of the Sodexo Clarence House Chase is that its last three winners have proceeded to Queen Mother Champion Chase success at Cheltenham.

Throw in Master Minded in 2009 and half its winners since becoming a Grade One in 2007 have lifted the two-mile crown a couple of months later.

It is the 2014 winner Sire de Grugy who sets the benchmark for Un de Sceaux: if the Irish star can dismiss him with another barnstorming performance from the front then he will be a red-hot Cheltenham favourite.

Walsh will hope for a more focused performance though than Un De Sceaux’s Christmas reappearance, when he fell for the second time over fences.

“It was hard to get him in a rhythm. He was standing too far back at some and getting in too deep at others, I was just never in a good rhythm with him,” the champion jockey said.

“He’s schooled really well since and Sire De Grugy is a new challenge for us. He sets a standard and we have to get up there. I enjoy riding him but the margin for error is quite small.”

The Walsh-Mullins team also run Vroum Vroum Mag in the Grade Two mares hurdle and the prolific seven-year-old is expected to earn her own Cheltenham ticket in some style.

Paul Townend takes the reins on the sole Mullins starter at Navan, Noble Inn, who is expected to go close in the conditions hurdle.

Gordon Elliott sends seven to the meeting as he remorselessly closes in on a maiden century of National Hunt winners in Ireland. Victory Mill, Woodford Island and the English import Fascino Rustico can provide the local trainer with a hat-trick.

In other news, the Turf Club has broadly welcomed amendments made by the Minister for Agriculture, Simon Coveney, to the Horse Racing Ireland Bill, which has passed through the Dáil and awaits examination by the Seanad.

In particular, amendments made to the sanctions section of the legislation were welcomed by the regulatory body’s chief executive Denis Egan, who said: “The Turf Club has a number of concerns with the legislation and is pleased the Minister has addressed most of those.”