Un De Sceaux primed for comeback in Navan on Sunday 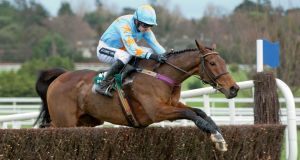 Ruby Walsh in action with Un de Sceaux who may feature in the Fortria Chase in Navan on Sunday. Photograph: Morgan Treacy/Inpho

Un De Sceaux could reappear in the tote.com Fortria Chase at Navan on Sunday.

Willie Mullins’ eight-year-old proved no match for Sprinter Sacre at Cheltenham or Sandown last season but got back to winning ways over two-and-half miles at Auteuil in May.

He failed to see out three miles back in France in June and would be back over the minimum trip were he to make his comeback this weekend.

The champion trainer has also entered Ballycasey, who ran out an impressive winner of the PWC Champion Chase at Gowran Park at the start of October.

Gilgamboa would be facing an even bigger drop in distance than Un De Sceaux, having finished fourth in the Grand National to Rule The World.

Kerry Lee, already a fairly frequent visitor to Ireland, may send Top Gamble, successful at Fairyhouse when last seen. In the Lismullen Hurdle Shaneshill could clash with Dedigout. Second in the RSA to Blaklion, Shaneshill was last seen in action in America.

Dedigout has been moved to Gordon Elliott from Tony Martin.

Mullins’ Let’s Dance, second to Apple’s Jade at the Punchestown Festival, could reappear in the For Auction Novice Hurdle.

Elliott has entered recent winner Mick Jazz along with Barra and Labaik.

Henry de Bromhead’s Identity Thief made a faultless winning debut over fences at Punchestown last month and is already a single figure price for the Arkle itself in March.

However, despite having not yet jumped a fence in public, it is Altior who heads ante-post lists for the two-mile novice chasing championship on the back of his hugely impressive display in the Supreme Novices’ Hurdle last season.

His trainer Nicky Henderson said: “After the November Novices’ Chase was reopened at Cheltenham on Sunday I have decided to enter Altior and if the forecast is correct it is a possibility that he may take his chance. But it must be emphasised that he will not run unless the predicted rain materialises.

“He is in great form and worked particularly well this morning therefore I am extremely happy with him. We will give him a schooling session in the morning after which a more definitive decision with regards to his participation at Cheltenham will be made.”

The Grade Two contest has attracted 13 entries in all.

Masters plan for November shows Augusta National is out of touch 22:30
Shane Lowry makes strong start with opening 69 at Muirfield Village 21:29
Richarlison’s touch of class rescues point for lacklustre Everton 21:11
Tottenham lucky not to leave Bournemouth empty-handed after another poor show 20:53
Dara O’Shea proves his worth with second goal for West Brom 20:30
Here is your handy guide to sport on television this week