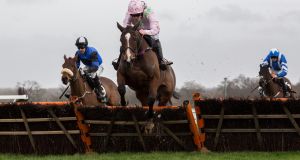 Un De Sceaux made all under Ruby Walsh for an emphatic success in the Sodexo Clarence House Chase at Ascot.

Willie Mullins’s bold-jumping eight-year-old had former Champion Chase hero Sire De Grugy tracking him for much of the journey, as he looked to bounce back from a fall at Leopardstown over Christmas.

Five out it looked like Sire De Grugy might have the answer but while the 1-2 favourite briefly had to hit top gear between the last two fences, his jumping over the final couple of obstacles was immaculate and five lengths was the winning margin.

Asked if the winner is as good as any two-miler he has ridden, Walsh said: “I don’t know, he has to win a Champion Chase before I can say that.

“I was lucky enough to ride Master Minded and Azertyuiop and rode against Moscow Flyer, so I’ve ridden some great horses, but he has all the attributes – he stays really well and has a good turn of foot.

“He was definitely looking (at his fences) a bit more today than he did at Leopardstown, which is probably no harm. A good round of jumping like that will give him confidence.

“Today was important, with such a good horse you want to be winning these big races and with it going wrong in Leopardstown it is great to come and do that.”

Mullins said: “He jumped much better today, he seemed to measure all his fences. I’m hoping he’ll improve a lot from that.

“He’s full-on every day, like he is racing, but he appeared more settled today than I’ve ever seen him.”

He added: “I think I’d rather watch him if he was someone else’s. When they’re your own and you have so much invested in them and they are jumping flat out, it makes your heart jump every time.”

It completed a big-race double for Mullins and Walsh after Vroum Vroum Mag extended her unbeaten run since joining the trainer to eight in the OLBG.com Mares’ Hurdle.

Sent off the 4-6 favourite, the seven-year-old was trying the near three-mile trip for the first time and handled it with aplomb.

Dropped out in the early stages and given a patient ride throughout, Walsh had taken much closer order rounding the final bend and jumped the second-last in front.

Coming to the last the only danger was in front and while she was not overly fluent, she just had to be momentarily shaken up to readily see off fellow Irish raider Jennies Jewel by three and a half lengths.

Walsh said: “I was in front an awful lot longer than I wanted to be on a mare with so much speed, but she travelled really well and jumped really well.

“She has loads of ability, she quickened up at the back of the last, not like a stayer, more like a speed horse.

“That (World Hurdle) is another big step up again, but she’s done everything we’ve asked her to do.

Mullins said: “I would have been disappointed if she had been beaten, coming here I didn’t have any worry about her ability on the ground or over the trip, it was just whether there was something better to beat her.

“Possibly the English mares didn’t run up to scratch today, because I think Jennies Jewel on ratings would be a fair bit behind us.

“She’s fast, she jumps well and she stays – that’s why you can put her into any trip, she relaxes and goes to sleep in a race and you switch her on when you want her.”

Mullins added: “It gives us lots of options for the Festival, I imagine she will go for one of the hurdle races.

“We’ll see when we get home, but we’ve got the Mares’ Hurdle and the World Hurdle.”

The latter is widely expected to go for the Mares’ Hurdle in which she fell last year, but could go for the World Hurdle if Mullins is able to get a prep run into her following an injury setback.

That could then mean Vroum Vroum Mag heads to the Mares’ Hurdle.

Ricci said: “I was very nervous as it is a big weekend for us, I wasn’t worried about the trip, Ruby didn’t have to ask her a lot, but it is the first time I have seen her pushed and for her to come off the bridle.

“I’m a bit worried Jennies Jewel was second, actually, but he just asked her for a bit of a push really.

“She has got the World Hurdle and the Mares’ Hurdle, so it puts us in a very good mind for Cheltenham.

“A lot depends on whether Annie Power gets another run. If we can get her another run before Cheltenham she will be hard to beat in the World Hurdle off her rating. But the problem is can we get a run into her? I’m not sure we can.

“I’m sorry for punters, but we just have to live with that uncertainty.”

Mullins said of Annie Power: “I’m very happy with her, she worked this morning, I didn’t see her, but I didn’t hear that she worked badly, so I assume she worked OK and she is still progressing.

“I’d imagine it would be a much harder task to go the World Hurdle without a prep run.”