Tony McCoy to partner Box Office in his final race 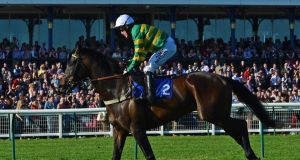 Tony McCoy’s final ride is looking almost certain to be aboard Box Office in the Bet365 Handicap Hurdle, the last race on the card at Sandown on Saturday.

Trainer Jonjo O’Neill is reported to have confirmed that the multiple champion jockey will ride the four-year-old and as long as the ground is not considered too quick, McCoy will sign off in the famous green and gold silks of owner JP McManus, his employer for the last decade.

“Whether Box Office runs is a little bit ground dependent, but it is our intention to do so,” said Frank Berry, McManus’ racing manager.

“If they water well and it is good, safe ground then I’m sure he’ll run. There’s also a bit of rain forecast which would be in his favour.”

McCoy’s intended mount has run at both the Cheltenham and Aintree Festivals, finishing seventh both times and will be stepping up to two and a half miles on Saturday.

At present, the only other definite ride for the putative 20-times champion jockey is Mr Mole in the race named in his honour, the Bet 365 AP McCoy Celebration Chase.

It was after Mr Mole won the Game Spirit Chase at Newbury in February that McCoy announced this would be his final season in the saddle.

McCoy’s ride in the Bet365 Gold Cup is likely to rest on whether or not Rocky Creek runs on Saturday.

With Willie Mullins already stating On His Own is more likely to run at the Punchestown Festival, the defection of Rocky Creek, who is 50-50 to run according to Paul Nicholls, would leave Bobs Worth at the head of the field and result in a 5lb rise in the weights.

That would mean the O’Neill-trained Lost Legend carrying 10st 8lb, a weight comfortably within McCoy’s reach.