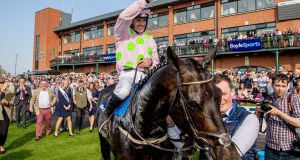 It’s Easter Monday which means I should be working at Fairyhouse and resenting the hell out of the 150th Irish Grand National. Instead, and like so much more that’s so much more important, this annual ritual too has been cancelled by the Covid-19 pandemic.

Easter Monday and the National remain as synonymous with each other as Laurel & Hardy. It used to be the Dubs day out. Thousands would pour out of the capital towards Ratoath and fret about whether or not the natives were friendly.

Famously it was close enough to Dublin that British army officers could get back sharpish once news of the Easter Rising filtered through in 1916. Almost half a century later, Arkle won the big race which helped cement national hero status for the greatest steeplechaser of them all.

Sporting, cultural and social history is wrapped up in the biggest Easter Monday show in town. Generations have set their clock to its observance. It’s why Taoisigh turn up every time to present the prizes.

Twenty five years ago the then incumbent John Bruton wound up giving the pot to one of his predecessors, Charlie Haughey. The old fraud owned the winner, Flashing Steel, and could go full ‘squireen’ as he led in the hero of the hour.

It hasn’t been the only uncomfortable podium encounter. In 2008 there was a notably stiff exchange of pleasantries between Bertie Ahern and Michael O’Leary after the Ryanair boss’s Hear The Echo won at 33-1.

One considered the other ‘jumped up’ and got labelled a ‘gobshite’ in return so there was a gratifying frisson on both sides. But as memory serves the puss on Bertie in particular suggested he wasn’t going to linger for longer than necessary.

Political guests of honour enjoy a police-escorted quick getaway from the track which has always felt like a great perk because the truth is the National has never been a race I look forward to.

There’s no logic to that really. It’s just personal bias, like squirming at a particularly prissy kind of west of Ireland accent or distrusting anyone who thinks Dara O’Briain is funny.

It’s not like such blind-spots are unusual. A GAA colleague loathes Munster hurling finals in Thurles because of the sickly sentiment and nostalgia that accompanies them. Likewise, the baggage around the National has just never been my bag.

It’s not as straightforward as never picking the winner. It’s not even having to arrive and leave when it’s nearly dark to avoid the worst traffic. Or that no one’s ever ventured to that flat stretch of Meath and wondered why Capri comes to mind. The National and me have never got on.

The tone was set by an early preview attempt at cracking the National code which included a line about Arkle’s trainer Tom Dreaper having saddled a record nine winners. Except it’s ten. I missed 1942. It’s the sort of gaffe that used to get wrapped around chips and quickly forgotten about.

Except that Easter Monday everyone seemed to be an expert. Perfect strangers walked past indignantly muttering ‘Prince Regent.’ Racing has a lot of unforgiving wise-ass fans out there and part of me can’t forget how the National proved it.

Since not everyone is jammy enough to be employed to concentrate on something they love - especially one that makes civilians pay 40 quid at the gate in pursuit of Bank Holiday fun - it’s petty stuff. But there’s something about the day that invariably makes me wary of finicky statistical traps.

It’s like this year was billed as the 150th Irish National. Except it isn’t. There were two years when it wasn’t run. In 1941 there was the second world war and in 1919 there was quite a lot going on too, including a pandemic.

Then there’s the inviolable Easter Monday slot which isn’t actually sacrosanct. In 1988 some genius had the idea to move it 12 days later. Then foot and mouth pushed the National out to early May in 2001. It’s pernickety stuff but irritating to get wrong and it always happens at Fairyhouse.

Underneath it all though there’s probably some sniffiness behind the resentment.

Two years after Arkle won in ‘64, perhaps the only horse ever to bear comparison to him, his own bad-tempered stable companion, Flyingbolt, won it even easier. But the last truly outstanding champion to win the Irish National was Desert Orchid 30 years ago.

Even then ‘Dessie’ lining up in a handicap was an aberration. There are enough valuable alternatives now that the best never have to concede loads of weight to inferior rivals. That means the full National ‘ballyhoo’ gets thrown at some non-descript winners.

It’s not peculiar to here. The Melbourne Cup is a handicap too and the ‘The Race That Stops A Nation’ remains basically an excuse for boozy nation-wide skittishness every first Tuesday in November.

In fact it can similarly seem like the Irish Grand National on Easter Monday would get by fine just as an ‘event’ even if there were 30 bullocks running around Fairyhouse. So for those of us concentrating on the sporting angle, much of Irish National day could seem almost frivolous.

Except at a time of such existential crisis what wouldn’t we give for frivolity now.

What wouldn’t we give to be bumper to bumper in a traffic-jam, cursing those yelling at us where to park before paying through the nose to wind up crammed cheek-by-jowl into bars and paying over the odds for spilled beer while trying to ignore some announcer braying over the PA that Rosanna Davison’s about to judge the best-dressed lady competition.

Who’d have thought there would be such longing for the sight of horses and jockeys and silks, the smell of frying onions and stale Lynx, the spectacle of Leo Varadkar pretending to be interested, or infuriating once-a-year punters complaining they can’t see Frankie Dettori jumping off the winner.

If resentment always felt churlish, then no National this Easter Monday only underlines our desperate craving for some reassuring normality in such abnormal times. So here’s to looking forward to 2021.