Tiger Roll ready for a brand new adventure at Aintree 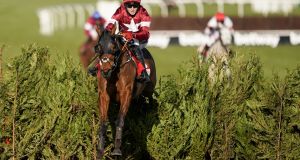 Tiger Roll returns to Aintree on Thursday – two days earlier than many would initially have expected.

Much has been written and said about the decision of owners Gigginstown House Stud to miss Saturday’s Randox Grand National with their equine great but he certainly adds a layer of intrigue to the Betway Bowl, the feature of the meeting’s opening day.

Gigginstown’s gripe with the handicapper was the fact that the dual Grand National winner had the rating of a Grade One horse and he is about to get the chance to prove who is right.

Tiger Roll is in the care of Denise Foster, and the current incumbent at Cullentra House Stables said: “He’s 11 years old, and it will be a big ask for him. Really we’re just hoping for a nice run from him.

“We can’t be too confident – I am wary of the fact that he is 11. That’s really all you can say about him.

“He left here in good form, and we’ll just have to see what happens. It’s all a bit of a question mark.”

With Davy Russell still sidelined by injury, Jack Kennedy comes in for the mount.

Another popular 11-year-old is lining up in opposition, in the shape of Colin Tizzard’s 2018 Gold Cup winner Native River.

He does so, though, without the aid of his old ally Richard Johnson, who retired on Saturday. The four-time champion jumps jockey has been replaced by Jonjo O’Neill jnr, who won the Denman Chase on Tizzard’s stable star last season. Native River finished fourth, best of the British, in the Gold Cup last month.

Paul Nicholls skipped the Gold Cup with dual King George winner Clan Des Obeaux, in preference for this race, but he has been fitted with first-time cheekpieces after he surprisingly failed to beat stablemate Secret Investor at Newbury.

“He ran very well last time at Newbury when just failing to give 6lb to Secret Investor, who picked up an injury and may not run again until Christmas,” Nicholls told Betfair.

“We felt after Newbury that fitting cheekpieces might help Clan’s concentration, and they seemed to sharpen him up when he worked in them on Saturday.

“He’s in good shape, and if the cheekpieces do the trick then he has an obvious chance.”

Nicholls also runs Real Steel, not seen since pulling up in the King George.

The Shunter continues to thrive and surprise trainer Emmet Mullins as he nears his next big-race assignment at Aintree.

The Shunter bagged a £100,000 bonus with that victory, which came after he had put himself in line for it when taking Kelso’s Morebattle Hurdle 12 days earlier.

He had already won a big prize at Cheltenham in November, in the Greatwood Handicap Hurdle, after moving to Mullins’s Co Carlow yard last summer from previous trainer John Clifford.

As The Shunter prepares for his next major challenge in Britain, Mullins reports him to be taking his exertions remarkably well.

“Yes, you wouldn’t know at home [he’s been so busy],” he said. “He’s thriving at the moment, he looks in great order, and heavier than he did going to Kelso before the journey started.”

The Shunter has proved hugely adaptable as well as durable, winning over both hurdles and fences, at trips varying between two miles and two miles and five furlongs and on both soft and good ground.

“We haven’t come across anything like him [before], nor did we think [to start with] he was as good as he is,” added Mullins.

“He just keeps improving. I would argue his most impressive performance was his last run at Cheltenham.

“Hurdles or fences, either is not too much of an issue. Arguably he could be a bit better over hurdles.

“But I’d say his ideal conditions are two and half miles on nice ground and after that hurdles or fences, we don’t really mind. He just seems to be in such a rich vein of form.”

Leading the home defence against The Shunter is the Nicky Henderson-trained Fusil Raffles, second to stablemate Chantry House in the Marsh Novices’ Chase at Cheltenham.

Henderson said: “This is his trip, I’m pretty sure. He ran a great race at Cheltenham. Envoi Allen helped us a fair bit by declining to come round all the way, and did leave the door open, but you’ve got to be there to take your chance when you’re offered it.”

Paul Nicholls is equally hopeful about the chance of Hitman, who arrives on Merseyside a fresh horse after missing Cheltenham.

The Ditcheat trainer said in his Betfair blog: “He’s a proper young chaser who was still travelling strongly when he came down in the Grade One Scilly Isles at Sandown and then enjoyed a nice, confidence-boosting victory at Newbury early in March.

“As he’s only just five and lacks experience, we decided to bypass Cheltenham and wait for this race over a trip of two and a half miles, which is ideal.”

Owner J P McManus is set to field seven runners in the Randox Grand National, with connections still to finalise a jockey for only Anibale Fly.

Trained by Tony Martin, whoever is chosen for Anibale Fly could be in for some thrill at Aintree on Saturday, given he has finished fourth and fifth in the race in the past, as well as being placed twice in the Cheltenham Gold Cup.

All other jockeys have been finalised, though, with McManus’s racing manager Frank Berry filling in the gaps.

“We haven’t sorted one out for Anibale Fly yet. He hasn’t shown much of late, but Tony is very happy with him, and hopefully he’s going there in good form.”