Ted Walsh cleared of any wrongdoing in Foxrock case 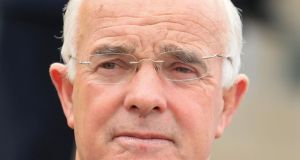 Ted Walsh has been cleared of any wrongdoing in the Foxrock case. Photo: Mike Egerton/PA

Trainer and RTE racing pundit Ted Walsh has been cleared of any wrongdoing and will face no penalty in relation to how the horse, Foxrock, lost its two front shoes at Punchestown in December.

The Turf Club reopened an enquiry into the running and riding of the Walsh trained Foxrock at Punchestown on the back of new video evidence. A marathon Referrals Committee hearing was held last month where Walsh was represented by the former Minister for Justice, Michael McDowell.

A judgement published today said the Referrals Committee couldn’t be sure how the horse’s two front shoes were lost in the aftermath of a race at Punchestown in December and it rejected a Turf Club claim that Walsh, with the assistance of two staff members, “removed or secured the removal of the front shoes once he (Walsh) was alerted to the stewards’ enquiry into the running and riding of the horse.”

Foxrock had finished third in a handicap chase at Punchestown and after a stewards enquiry jockey Adrian Heskin received a minor penalty after evidence was heard from a vet that the horse pulled off both his front shoes during the race.

The case was reopened when video evidence came to hand showing Foxrock wearing both front shoes immediately after the race.

At the Referrals Committee hearing on April 17th, Walsh gave evidence of an hour and a half. The champion trainers Aidan O’Brien and Willie Mullins also gave evidence as did a number of veterinary surgeons and farriers.

The Committee decided “the timing of the events was the most important factor in deciding the outcome” and said “the formation and execution of a plan to deliberately remove the shoes had to have taken place within a time period of approximately seven to eight minutes, from around 3.13pm, when Foxrock left the parade ring, to around 3.20pm, when he was observed by the Turf Club veterinary officer.

In clearing Walsh, the Committee felt the trainer “would have had a relatively limited window of opportunity to determine on this course of action, obtain the necessary implements and remove the two shoes from the horse, all in the contexts of stable yard on race day.”

1 Man City to investigate Kyle Walker over lockdown sex party
2 Matt Williams: The economic earthquake for European rugby is coming
3 Shane Lowry comfortable in his own skin and out for more Major glory
4 Simon Zebo: ‘It’s been tough not being able to put my hand up to play with Ireland’
5 Understated Stephen Kenny offers Ireland a ray of light
Real news has value SUBSCRIBE