Taghrooda on course for Classic double in Darley Irish Oaks 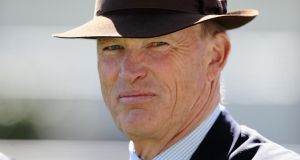 and trainer John Gosden has given the clearest indication yet she will attempt a follow-up at the Curragh.

Taghrooda’s defeat of Tarfasha at Epsom completed a 1-2 for owner Sheikh Hamdan and the possibility of both fillies taking each other on again at the Curragh hasn’t been ruled out for a race the Shadwell team has yet to win.

Completing the Oaks double has historically proved a tougher task with Snow Fairy in 2010 the last to do it, and the 13th in all. In comparison, Australia was the 17th colt to land the Derby double.

The Curragh’s €400,000 fillies highlight is scheduled for another Saturday evening start with a 5.35pm “off” time currently scheduled.

Gosden has also revealed there is a “strong possibility” his King Edward VII Stakes-winner Eagle Top will be supplemented into the King George VI & Queen Elizabeth Stakes at Ascot a week after the Curragh. The Newmarket trainer pulled off the same move with Nathaniel three years ago. “It costs £75,000 to supplement so you have to be pretty sure of yourself but we can leave it another week. It’s a strong possibility,” he said.

Nathaniel won the King Edward before beating Workforce in the King George over a month later.