Substantial increase in out of competition drug tests on racehorses 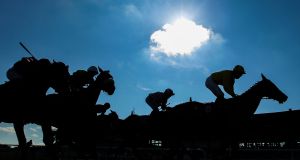 There was a substantial increase in out of competition drug testing on racehorses in Ireland last year, although none of the 778 samples taken returned positive.

The numbers were outlined in the Irish Horseracing Regulatory Board’s (IHRB) 2019 statistics which were released on Tuesday.

They showed 13 positive drugs tests from almost 4,400 samples taken in total last year. That’s a drop from 27 positive results in 2018.

Among the most high-profile cases was the David Dunne-trained Druim Samhraidh, who tested positive for the anabolic steroid Boldenone after winning at Ballinrobe in August.

Co Meath-based Dunne subsequently had his licence suspended for four months. He was the first trainer suspended by Ireland’s racing authorities since 2015.

Druim Samhraidh’s sample was one of 3,004 taken at racecourses, a drop of 30 on 2018. However the rate of out of competition tests jumped significantly to 778 compared to 512 a year previously. Five years ago there were just 151 such tests carried out.

An IHRB spokesman confirmed on Tuesday that none of the 13 positive results last year came from out of competition testing.

It’s understood the growth in out of competition testing could continue in 2020 despite the impact of the Covid-19 pandemic which has brought racing to a halt until at least April 19th and restricted people’s movement generally.

“There is a budget there for 2020 to carry out out of competition testing. Even in the current climate we envisage using that budget,” said the IHRB spokesman.

The figures for 2019 are in the continuing context of racing’s impasse in relation to the sport’s regulator being unable to drug test on unlicensed premises such as stud farms and pre-training yards.

Although it’s almost two years since the board of Horse Racing Ireland unanimously approved the industry-wide policy on prohibited substances and doping control – which pledged traceability of thoroughbreds throughout their lives – implementation continues to be stalled.

The jurisdictional issue appeared to have been resolved by use of a legislative service level agreement (SLA) that would transfer statutory responsibility to the IHRB.

However an SLA still has not been granted by the Department of Agriculture and the coronavirus emergency means any resolution is unlikely in the short-term.

“There’s no update on that at the moment. It’s slow and definitely not ideal dealing with the department in terms of what they have to deal with now,” the spokesman added.

Two jockeys returned positive tests for drugs in 2019 which was down from five in 2018.

A total of 317 samples were taken across 34 race meetings, 64 others were taken at eight point-to-point fixtures.

In contrast, and for the sixth year in a row, there were no positives from almost 900 alcohol breath tests taken on jockeys.

The 2019 figures showed significant increases in breaches of the whip regulations and the vaccination rules. The regulations in both areas were tightened up last year.

The vaccination rules were changed after last year’s equine flu outbreak. Penalties for breaches of the whip regulations increased by 78 per cent to 379.

“This is as a result of the new more stringent whip rules which were introduced in April under which the maximum number of strikes allowable was significantly reduced to eight,” said the IHRB’s chief executive Denis Egan

“That said we have found the rate of offending has been reducing as riders become more familiar with the changes.

He added: “It is worrying that the number of trainers licences fell in 2019 with a 16.5 per cent decrease in National Hunt licences noted.

“However there may be more positive signs in the fact that we do have 16 people who are enrolled on a new trainers course this year. The course was due to begin this month but is now temporarily delayed due to the current circumstances related to Covid-19.”

Other features among the statistics were a total of 1,776 full-time stable employees in the country last year with another 1,476 working part-time. The total of 3,252 is slightly up on the 2018 equivalent.

The IHRB’s medical officer, Dr Jennifer Pugh, commented on increased concussion rates among riders: “The increase seen among National Hunt jockeys over the last two years and in Flat racing in 2019 may be attributable to quicker ground conditions for the best part of the year, along with better detection methods and recognition by the rider of the importance of reporting symptoms.”