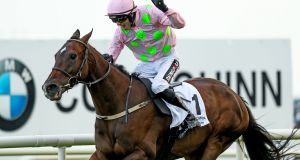 Willie Mullins will break new international ground in Seoul next Sunday when Riven Light lines up for the Keeneland Korea Cup.

Riven Light made a stunning return from near fatal injury to win at the Galway festival in July and has arrived in South Korea to take part in a nine furlong international contest worth almost €770,000.

Mullins famously profited in the Far East before when Blackstairmountain won Japan’s biggest jumps prize, the Nakayama Grand Jump, in 2013.

Ireland’s champion jumps trainer has also made an international impact on the flat including with Max Dynamite who has twice been placed in the Melbourne Cup.

However, next weekend’s Korean venture is an exciting new venture for Mullins who has enjoyed a bumper summer in terms of local National Hunt action and now flies the flag for Ireland in the third year of the international invitational races at the Seoul track.

Japanese-trained horses have won the first two editions of the Cup and last year’s winner London Town is set to defend his crown.

However, his opposition will include both Riven Light and the Richard Fahey -trained Forest Ranger from Britain.

Victory for the Irish star would continue Riven Light’s remarkable rejuvenation since almost losing his life after fracturing a pastern in Australia last October.

Initial fears he might have to be put down were happily averted and the Rich Ricci-owned horse completed a fairytale return to action in the Galway festival’s big mile handicap in July.

Riven Light overcame topweight and a widest of all draw to become just the second horse to win the Galway highlight in back to back years. Now he is on his international travels again.

“The Irish Thoroughbred Marketing people, whose job it is to market Irish racing across the world, heard of this race and told us about it after Galway ,” Mullins explained on Sunday.

“It’s a deep sand track which shouldn’t bother us. Our fellah is used to that here so we think conditions will suit us. There’s huge prizemoney so we’re going to give it a go.

“He has just landed there. We boxed him to England and he flew from Heathrow to Paris and on to Seoul. Our horses are used to travelling.

“He will do two or three days in quarantine over there but that’s in the stabling area and there are training facilities anyway so that’s okay,” Mullins added.

No final jockey arrangements have been made for the Irish runner although Mullins is keen to secure someone familiar with the Seoul course.

“It’s a very busy weekend internationally, in England and in France, and I think Hong Kong is starting up again.

“We were hoping to get Joao Moreira or Zac Purton. But Moreira is back in Japan – and time-wise it doesn’t suit. Zac Purton has be in Hong Kong. So we’re going around the world trying to find someone and we’re waiting on one or two confirmations,” Mullins said.

Riven Light earned a career high 114 rating for his stunning Galway success, a mark that puts him to the forefront of the Korean Cup contenders.

It was a win to rank highly among Mullins’s long-list of training accomplishments and remarkably suggests that the six year old could still be improving.

“Figures-wise it looks like that. But that could be Galway. Horses that like Galway can be lbs ahead there. It’s a unique track and horses can be better there than anywhere else,” he said.

Mullins reports that many of his big-name National Hunt stars are back in training following their summer break. “They’re in all manner of shapes and sizes after doing well at grass!”

But in terms of firm plans it is other international flat options such as the Irish Leger, the Prix Du Cadran the Prix Royal Oak and the Melbourne Cup, that are his more immediate focus.

“I have horses in all those big staying flat races but they’ll have to improve,” said the man who saddled Wicklow Brave to win the 2016 Irish St Leger.

“Max Dynamite was disappointing at York so he might go for the Doncaster Cup rather than the Irish Leger.

“Thomas Hobson ran well enough at the Curragh last time. It depends on whether or not we want to book a ticket for Melbourne if we go for the Leger or try a longer trip in a different jurisdiction,” he added.

“Gustavus Vassa and Chelkar are in the Melbourne Cup too but aren’t going to get in. They have Australian owners who are keen to bring them to the Spring Carnival though so we’ll build a programme with races they can run in like Geelong Cup,” Mullins added.