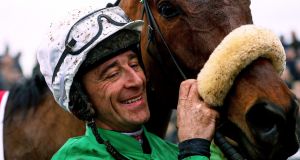 Presenting Percy’s owner Philip Reynolds has revealed Bellshill is the rival he fears the most, as the Magners Cheltenham Gold Cup gets ever closer.

He feels Willie Mullins’ charge ticks all the boxes — but reports his own horse to be at the top of his form ahead of next Friday’s blue-riband event.

“Looking at the race, there are a number of horses who all have a great chance. There are five or six horses towards the top of the market who all have a chance, but probably the one I worry about is Bellshill,” he said.

“He is a Grade One winner of a bumper, a hurdle and over fences and jumped very well in last year’s Irish National. He stays, jumps and won’t mind any type of ground, so he has the overall profile of one to watch.

“However, we are pleased with Presenting Percy and we are looking forward to running him.”

Presenting Percy won the RSA Insurance Novices’ Chase last year to register a second successive Festival triumph, but he has yet to run over fences this term.

His only outing this winter was a winning one, in the John Mulhern Galway Hurdle at Gowran in January, although he has had a session over fences at Galway recently.

“Pat (Kelly, trainer) is happy with Presenting Percy as are all the team,” said Reynolds.

“We were delighted with his schooling session at Galway last week and he jumped nicely. The plan is to go back to Galway for another piece of work this weekend before we head over to England for the Gold Cup next week.

“Percy will then travel over to Cheltenham on Tuesday and we have been delighted with his preparation in the last couple of weeks.

“The rain is starting to arrive at Cheltenham and of course the more it does rain, lack of rain won’t be an excuse!

“However, the rain was never something we were pinning our focus on. He has won a Pertemps at Cheltenham on good ground and does handle a sounder surface fine.

“Cut in the ground is of course preferable, but we haven’t run him on good ground so far this year as we just wanted to mind him with Cheltenham in mind. We were always going to run at Cheltenham even if the ground was good, but the rain is obviously a help.

“Pat is pleased with him and it would of course be very special to win a Gold Cup.

“We are a week away now and it is going to be an exciting yet nerve-racking week.”