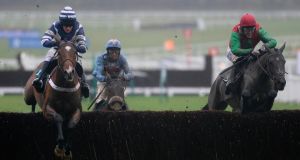 His three-quarters of a length verdict might have been lessened had the runner-up not nodded on landing over the last with Tony McCoy, but the way Barry Geraghty’s mount galloped up the hill it is hard to imagine the result was affected. Paddy Power cut Oscar Whisky to 8 to 1 (from 10s) for the Jewson.

Nicky Henderson is ready to give his 5 to 6 winner another outing ahead of the Festival, and said: “He was good all the way round and Barry was very clever not to force it early on. He’s come here twice this season and done that on his own, but thankfully not today, and it was quite nice to get a bit of competition.

“Barry has then taken it easy coming down the hill which was very sensible. Remembering he wasn’t that far off Champion Hurdle class we’ll put him in the Arkle as well, and that would be an option if it came up soft.

“He’s on the older side to be switching to fences at nine, and I must wish him happy birthday, but he’s taken to it well. He’s a stuffy horse so we’ll probably give him another run. It could be in the Scilly Isles (at Sandown).”

Geraghty said: “He was good here the last day and while I can’t say he wants that kind of ground he showed his class.”

Henderson issued a further bulletin on Sprinter Sacre, who is to canter on Friday.

He said: “It’s all good, but Friday is the crucial day when Celia (Marr, specialist) will come down from Newmarket with a heart monitor.

“We are a long way from being in complete daylight, but the worst could well be behind us. The cardiographs showed distinctly how his heart had self-corrected.”

Willie Mullins’s Annie Power extended her unbeaten run to nine with an impressive victory in the 32Red.com Mares’ Hurdle.

With just three runners, Ruby Walsh was content to track Empire Levant in second, with a reasonable gallop appearing to be set in the gruelling conditions.

Walsh’s mount jumped two out more or less upsides the grey and soon eased to the front.

Zarkandar and Dary Jacob took closer order to at least draw level and neither of the principals were fluent at the last.

However, Walsh quickly gathered up 2 to 5 favourite Annie Power and she swiftly asserted before drawing nicely clear.

Double Ross followed up his December Gold Cup success with a decisive win over Cedre Bleu in the Fairlawne Handicap Chase.

The gelding put in exhibition of clean jumping under trainer Nigel Twiston-Davies’s son, Sam, to justify strong support from 2 to 1 in the morning to 11 to 8 on the off, triumphing by four and a half lengths.

Twiston-Davies senior said: “He loves it round here, he handled the ground well and I shall enter him in all the novice chases at the Festival.”

Sam Twiston-Davies said: “He is a relentless galloper, who keeps going.

“I was just a little worried that it might have been too soon after his win at the last meeting. All credit to the girl who looks after him, she told me was as fresh and well as he has been all season.”

Return Spring landed some good bets in the Rewards4Racing Handicap Hurdle, a race dominated by the winner and runner-up Quartz De Thaix from some way out.

Quartz De Thaix attempted to make all and although headed turning for home battled back to lead again when Return Spring seemed to get caught up in some standing water at the last.

However, Richard Johnson had plenty up his sleeve on the 7 to 2 favourite. who quickly asserted up the hill.

Philip Hobbs has the Festival in mind for Return Spring, and said: “He keeps running well here. We were worried about the ground, but he coped with it well. He jumps and keeps going, my job now is to get him qualified for the Pertemps Final.”

Harry Fry matched his rookie season tally of 20 wins when Mendip Express sluiced through the conditions to post a five-length defeat of Alfie Spinner in the Foundation Developments Ltd Handicap Chase.

His first Cheltenham winner “in my own right” (he was credited with much of the training of 2012 Champion Hurdle winner Rock On Ruby), Fry has the Festival in his sights but is uncertain whether it will be the four-mile National Hunt Chase or the RSA Chase for the Will Biddick-ridden 7 to 1 shot.

The Seaborough trainer said: “He travelled into the race well and did it nicely.

“We came here to find out where we should go for the rest of the season. It was plenty soft enough and he did make a couple of mistakes. It was either coming here or Warwick on Saturday week, but he would have had to give weight to some smart novices had we done that.

“As to the Festival, I would fully expect Will to press for a run in the amateurs’ race here in March while Noel Fehily will be saying we should take the novice route.”

Mendip Express is owned by the Mendip Syndicate of whom Paul Barber has a share.

Owing to standing water on the course, fences five, six, eight, 14 and 15 were omitted from the race.

Paddy Power gave Mendip Express a 20 to 1 quote for the RSA Chase and make the former point-to-pointer 10 to 1 for the National Hunt Chase.

Lizzie Kelly ensured a couple of bubbles were burst in the opener as the rider made most of the running on 9 to 1 shot Aubusson to see-off a field that included the much-vaunted pair Ballyalton and Racing Pulse.

A deluge that resulted in 13 millimetres of rain turning the ground to soft, heavy in places brought about a sedate pace for the Neptune Investment Management Novices’ Hurdle, with Kelly in the driving seat for almost the entire way.

Five horses were covered by about a length jumping the last, but Aubusson found extra to hold 22 to 1 outsider Regal Diamond with 15 to 8 favourite Racing Pulse third and Ballyalton fourth.

Owner Jane Williams was full of praise for Kelly after greeting the Nick Williams-trained victor.

She said: “We were almost scared to bring the horse to Cheltenham but that makes him one of the top novices in the country. When we saw the rain that was all to the good, but he won’t get those conditions at the Festival so that must be in doubt

“All credit to Lizzie. I’m thrilled for her riding her first winner at Cheltenham. This horse is very straightforward – you could ride him at pony club – but Lizzie’s had 25 winners and it’s a day she’ll never forget.”

Kelly said: “There are only so many opportunities to ride against professionals at Cheltenham so I shall live the moment.”

Paddy Power gave the winner an introductory quote of 25 to 1 for the Neptune in March.