Champion trainer, younger brother and nephew all make it to the winners’ enclosure 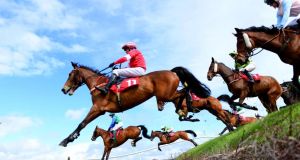 A record opening day crowd of 20,214 crammed in for the the start of the 2015 Punchestown festival – where having a Mullins of some description on your side appeared vital to finding winners.

Since Willie Mullins has been leading festival trainer on a dozen occasions in the past, a Grade 1 hat-trick for Irish jump racing’s dominant figure – even if it was Valseur Lido who landed the Growise Champion Novice Chase and not the hot-favourite Don Poli – hardly caught anyone by surprise.

Douvan did his job in spectacular fashion at 1-6 in the Herald Champion Novice Hurdle, but after that steering job, Ruby Walsh picked the wrong one in the featured €200,000 Boylesports Champion Chase, finishing fifth on the favourite Champagne Fever, behind his stable companion Felix Yonger who edged out Baily Green in an exciting finish.

Jockey arrangements suggested Felix Yonger had been third-string among the Mullins runners, but shrewd money pushed the winner in to 5-1 beforehand and in-form Danny Mullins pushed the horse out to a first top-flight success.

However he has rallied to some effect since then and his winning touch was honed with a vengeance recently during a 10-day sojourn in the US, where he rode four winners from just seven rides.

“I was riding in Atlanta and in North Carolina. [Trainer] Jack Fisher was good to put me up on some nice horses,” said the 23-year-old son of former champion jockey, Tony Mullins, who was determined to view the season positively.

“Willie has put me on some good rides and I hit the bar a couple of times at Cheltenham [runner up on both Arctic Fire and Milsean]. But it’s great to win these Grade 1 races. I only do the steering, but the horse was very quick over the last two and has always had an engine,” added Mullins who picked up a one-day ban for his use of the whip.

On a day when his younger brother Tom also trained a winner with Some Article, Willie Mullins was particularly impressed with his nephew’s performance on Felix Yonger and said: “He’s full of confidence, riding out of his skin. That confidence allowed him to sit, get the horse’s lungs filled, and then come with one rattle. It paid off. They’re a good partnership.”

The strength in depth of the Mullins team has been evident throughout the season, so when Don Poli finished last of five at 4-9 favourite, there was a near-inevitability about the Mullins – and Gigginstown Stud – number two, Valseur Lido, taking advantage under Walsh.

Don Poli never looked comfortable and a mistake at the third last saw him drop away tamely. Mullins was inclined to blame ground conditions for the performance.

“I think the ground was too lively for him. Valseur Lido handled it better. And I’ve always said Don Poli wants a longer trip,” said the trainer. “But I’ve always thought the winner is good.”

Bookmaker reaction was to lengthen Don Poli out to 12-1 for next year’s Gold Cup and introduce Valseur Lido at 16-1, adding to Mullins’s strong hand which is headed by another hugely impressive Cheltenham winner, Vautour.

Trainer Gordon Elliott, who prepares many of O’Leary’s youngsters before they are dispersed among other handlers, will hand over the winner to his rival Willie Mullins for a jumping career and explained: “My job was to win a point-to-point with him, so I’ll keep the peace and say nothing!”

Owner JP McManus made his presence felt with a double courtesy of Wish Ye Didnt’s win in the first race of the week over the famous Punchestown banks and Some Article’s handicap hurdle success.

Wish Ye Didnt’s trainer Enda Bolger is targeting a 15th La Touche Cup success on Thursday when Nina Carberry is again likely to ride Quantitativeeasing and the partnership wasted no time getting their festival eye in.