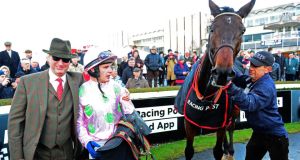 Owner Rich Ricci and jockey Paul Townsend with Arvika Ligeonniere, who will line up in Wednesday’s Queen Mother Champion Chase at next week’s Cheltenham Festival.

Since owners paying through the nose are the root of all things racing, it can be argued the select group of JP McManus, Michael O’Leary and Rich Ricci will be the foundations of next week’s Irish challenge at Cheltenham: but only one of that trio can claim to have played Gaelic football for Roscommon, and here’s a hint: it’s not one of the Irish guys.

It’s a sign of the mystery that surrounds Rich Ricci that when he throws out the unlikely GAA nugget that he togged out half a dozen times for ‘the Rossies’ in New York more than two decades ago it is at once baffling and somehow fitting.

If there’s a more flamboyant, colourful, yet enigmatic figure in racing right now, then they are even more adept at maintaining their privacy than Ricci is. And Ricci is very good at it.

Pitched the relatively harmless query as to where in America he grew up, the former chief executive of Barclays Corporate and Investment Bank eventually narrows it down to “the eastern part of the United States.” This actually is a concession to geographical precision since Ricci usually says nothing at all when pressed on the personal – “I don’t like talking about myself”.

If that gives an impression that this hugely wealthy 50-year-old American businessman, the bulwark owner at champion trainer Willie Mullins’s all-conquering stables, has learned some old-fashioned “tell ‘em nothin’” Irish cuteness, then it’s not accurate, or at least not totally accurate.

For one thing anyone fond of flying under the radar wouldn’t cut such an obvious figure on the racecourse. Invariably attired in bespoke three-piece suits a long way removed from the battered waxed-jacket stereotype, Ricci also favours dark shades, and hats that, considering his banking background, almost inevitably led to “fat-cat-in-the-hat” headlines.

Sense of humour
That he promptly named one of his horses Fatcatinthehat indicates a sense of humour that those close to him insist is never far away. But unlike the high profile of a McManus or an O’Leary he remains a largely mysterious figure to the racing public despite being one of the most prominent owners in the game. And that’s the way he likes it.

Ricci’s rapid racing rise – with a string of Mullins-trained horses that next week includes prime hopes such as Annie Power, Champagne Fever, Vautour and Ballycasey – has coincided with a profile outside the sports pages one imagines has had the more private Ricci recoiling in horror.

At a time when the banking industry has enjoyed all the public cache of a veruca, an executive called Rich Ricci with a string of racehorses was like headline cat-nip. The credit-crisis found a poster-boy to blame, a cartoon figure to illustrate the excesses of a financial system which had seemingly gone past mere greed to stark grotesque.

Never mind that in private, Ricci’s tastes are reportedly not particularly outrageous. Like the Ryanair boss Michael O’Leary, horses appear to be his biggest extravagance. Last year, Ricci left Barclays after a management shake-up, but for someone who reportedly made close to €20 million in 2012 just from the sale of shares gained as part of bonuses and incentives schemes alone, it can’t have been a seismic blow to his standard of living.

Nevertheless it’s hardly surprising the owner who still lives in England with his English wife, Susannah, views media interest in him with acute suspicion. When it comes to profile, less is more, and none at all is best. Little wonder that another Barclays director once claimed to know next to nothing about his colleague bar “he’s bald and gets shit done”. And now we know he has played county football, almost.

‘Roscommon team’
“A pal of mine was a bartender and he was coaching the Roscommon team and they were short on players. I got talked into playing half a dozen games,” Ricci laughs. “I was simply a body-filler.”

Ricci isn’t Irish-American yet along with the GAA and friendly barmen, he has embraced another Irish passion, racing. But he is not a recent convert. “I’d go to good old Suffolk Downs in Boston, not a salubrious track by any stretch of the imagination: we used to call it Sufferin’ Downs. But I loved the atmosphere. I still do, anywhere. I’ve loved racing all my life, flat and jumps,” he recalls.

When he joined Barclays in London in 1994 his rise through the executive ranks didn’t stop him continuing to go racing, and it was the National Hunt variety that caught Ricci’s imagination most of all. “We have a little bit of it in the United States, except it’s more of a novelty than anything. But seeing these big, beautiful animals jumping these huge obstacles at somewhere like Sandown was amazing,” he says.

The passion might have been ignited in Britain but it was Ireland that got the benefit. His friend, Pat O’Riordan, had horses with Paddy Mullins and introduced him to the legendary trainer’s son, Willie, in 2005. His first horse was Scotsirish, a five-year-old, and the American handicapper’s first reaction was why had he just bought such an old horse? The trainer soon put him right.

“What struck me about Willie was he didn’t treat me like a mug with some money. He was very patient, thoughtful, couldn’t be more helpful, took time to explain things, like a horse’s anatomy; he could be a vet,” Ricci considers. “It helped we became fast friends. We have lots of the same interests, have a lot of laughs.”

The friendship has blossomed to the extent that Ricci’s colours are synonymous with the current Mullins hegemony. It’s a relationship of mutual benefit based on the trainer’s ability to identify and nurture talent and the owner’s capacity to buy it. The striking thing is how rarely they fail to hit the quality bulls-eye.

“Harold Kirk sources our horses and he’s the unsung hero at Willie’s. He’s brilliant. The way we do it is we talk about sires we like and if we see a horse we like we go after it. We’ve had a lot of success, and not many duds, which is a tribute to Willie and Harold.

Supply chain
“I have an idea of what I’m comfortable spending but I recognise to be competitive you have to reinvest throughout the year. Since this season started, I would say I’ve bought half a dozen that no one will see until next year. You have to, to keep the supply chain going.

“It’s got very competitive so you have to be committed, but conscious that you can’t spend stupid money either. I’m very comfortable the way Willie and Harold think about it, and the results show we have got value,” he says.

Unlike his ownership rivals, Ricci has hitched his wagon exclusively to Mullins, and to Irish racing. He says simply it suits him and he has no plans to change. “I measure success by how many Graded winners we have, and how many Grade One’s. I don’t have ambitions to be champion owner. I don’t have enough horses to compete with JP and Michael.”

By any measure, his Cheltenham team is unrivalled in terms of depth, and crucially in terms of potential beyond next week.

“Ruby (Walsh) thinks Champagne Fever is a Gold Cup horse. And once Annie Power ran in a championship race I was happy. We’ll see if she stays, because we think she’s a Gold Cup prospect too,” he says excitedly.

As he says it, the man from nowhere starts to sound very Irish.