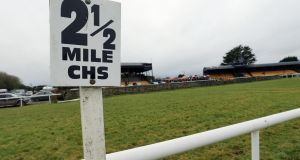 Racing is continuing in Ireland behind closed doors and ITV will broadcast live from Thurles this Saturday. Photo: Inpho

Bookmakers have welcomed “an oasis in the desert” after it was announced ITV Racing will broadcast five races from Thurles on Saturday, as Ireland keeps the show on the road during the coronavirus pandemic.

Meetings had been due to be aired from Newbury and Kelso — but with all British racing suspended until the end of April, Irish action will fill the void.

The Grade Three Pierce Molony Memorial Chase is set to be the feature event of a two-and-half-hour show on ITV4, with Ed Chamberlin presenting the output, which will be produced in the UK with the smallest possible team.

Bookmakers have been warning of huge potential losses over the coming weeks, not least due to the cancellation of next month’s Grand National meeting at Aintree.

Simon Clare, Ladbrokes Coral PR director, said: “This is really good news from ITV Racing for all racing fans, bookmakers, and anyone who enjoys a flutter on a Saturday afternoon, as in the absence of any other major sports and football, or UK racing, this live broadcast of Thurles will be like an oasis in the desert.

“These are unprecedented, worrying times, and the impact and seriousness goes way beyond the world of racing and betting, but the importance of keeping at least some of the show on the road through these dark times cannot be underestimated, to provide entertainment to many people and keep business ticking over.

“Thanks to the ITV cameras, I imagine turnover on this Thurles card will probably exceed anything we’ve taken on an Irish meeting for a very long time.”

Betfair’s Barry Orr added: “It’s a positive step for all concerned and once the Irish Government are fully behind racing continuation, then it is good for the industry as a whole.”