Leopardstown races: when the going gets soft, the hardy get going 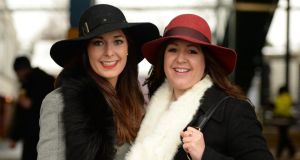 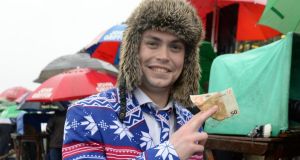 “Ladies and Gentlemen, we have a change to the going. The going is now soft,” echoed a disembodied voice over the speakers an hour into day one of the four-day Christmas racing festival at Leopardstown.

The words were as unnecessary as the Titanic’s captain telling passengers their boat had started shipping water. Even the most novice race-goer would have easily guessed the going on the race course was soft – the going on the punter side of the railings was sodden.

It truly was a miserable opening to the most festive of festivals and – apart from a brief respite ahead of the fifth race – it lashed for the entire day.

One of the biggest cheers as racing got under way was directed at a poor unfortunate’s Mr Bean-like attempts to fix his umbrella after it turned inside out in high winds. Each time he tried to right it, gales wronged it. Over and over. He didn’t give up and when he eventually fixed his brolly, the cheer nearly lifted the roof of the main stand.

The Tote bookies weren’t cheering, mind you. “It’s been a dreadful day and the boss is in a real bad mood,” said one. “We’ve been losing big.” They always say that though, don’t they?

The Tote takings were actually up marginally on last year despite the fact that attendance was significantly down. All told 12,818 hardy souls shook themselves free of their turkey comas to brace the elements, compared with 14,802 last year.

Bono was not among them. The U2 singer’s address to the nation from the lobby of the Pavilion, the warm, dry VIP area where the well-heeled wine and dine, has become as much a part of Christmas as the Pope’s Urbi et Orbi address.

And it’s sometimes as interesting. Not this year though.

Simon Carmody, who used to sing with The Golden Horde, delivered the bad news. “Uh, no, Bono’s not going to be here today. He hurt his shoulder, you know,” he told a press pack desperate for a quote from any class of celebrity.

“Michael D is coming tomorrow,” a steward said. “And John Rocha’s just gone inside. With Guggi,” he added.

Stephanie Roche – the France-based professional footballer who’s in the running for the FIFA goal of the year – was in the crowd. Unlike many of those tottering around on vertiginous heels, she wasn’t planning a mad one. “We start back on the 3rd so I probably won’t indulge much. But I’ll go out with my friends tonight and that will be probably be it,” she said.

Keith Connolly from Finglas made a special effort. Like many of the young men in the crowd the 23-year-old was wearing a suit. Unlike his peers, his was bright red and festooned with elves and snowmen and Christmas trees. It would have caused a blind horse to bolt.

There was a big upset as the feature Racing Post Novice Steeplechase was won by Clarcam from Michael O’Leary’s Gigginstown Stud and not long odds-on shot Vautour. While his horse was flying high, the Ryanair boss was nowhere to be seen and his brother Eddie accepted the accolades before scurrying out of the rain.

1 Gerry Thornley: Wild reactions to this Ireland team as fickle as the wind
2 Cian Healy out of remainder of Six Nations
3 Man United’s net debt rises by €85.7m to €455.5m in three months
4 Dan Tuohy explains ‘rotten to the core’ comments
5 Doris and Kelleher make strong case to start against Italy
Real news has value SUBSCRIBE