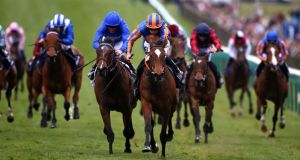 A QIPCO Irish Champion Stakes pot already bubbling with ‘race of the season’ possibilities has a potential new ingredient with the classic-winning filly Legatissimo still in the shake-up to run, although the likely line-up for the ‘Longines Champions Weekend’ highlight remains frustratingly uncertain.

Final declarations for the €1.1 million feature will be made tomorrow from nine entries – all Group One winners with a total of 22 top-flight successes between them – still in contention after a final forfeit which duly sees the classic colts Golden Horn and Gleneagles in line to appear at Leopardstown alongside top older stars, Free Eagle, Cirrus Des Aigles and The Grey Gatsby.

Aidan O’Brien has also left Highland Reel and Found, while as anticipated Jim Bolger will aim for the 10-furlong event with his own classic star, Pleascach. However, the Coolmore team have added a further string to their Champion Stakes bow with Legatissimo, also an entry for Saturday’s other Group One, the Fastnet Rock Matron Stakes.

David Wachman’s 1,000 Guineas and Nassau Stakes winner has never previously raced against colts but the Co Tipperary trainer said: “All options are open at this stage. We will have to see how things are shaping up on Thursday, see what the ground is like, and see what the owners want to do.”

The Coolmore partnership’s principal Champion Stakes hope appears to remain Gleneagles, who would be ideally suited by the “good to firm” ground conditions as they currently stand at Leopardstown.

Golden Horn’s trainer John Gosden also doesn’t want the going to turn too soft for his Epsom Derby winner. But the picture is complicated by forecast rain for the Dublin area on Friday.

“We are expecting some rain on Friday but it is very difficult to know how much. Rain from the west has to cross the Dublin and Wicklow mountains before it gets to us and often we can escape it here at Leopardstown,” said the track’s chief executive, Pat Keogh.

The last four races of Saturday’s card, including the Champion Stakes and the Matron Stakes, will be run on Leopardstown’s outer track, which is currently marginally faster than the inside course.

However, the uncertainty over running plans echoes the run-up to the 2009 Champion Stakes when Sea The Stars was confirmed a definite starter just the evening before.

O’Brien could be the one making a late call on this occasion as he pursues a record-breaking eighth Champion Stakes victory. Gleneagles has skipped three Group One races already this season due to unsuitable going and O’Brien is wary of giving his dual-Guineas hero a first start at 10 furlongs on a surface he judges too slow for the colt to show his best.

Golden Horn remains favourite for the big race, attempting to follow in the hoofprints of The Fugue, who won the race for Gosden two years ago, the middle-leg of a hat-trick of victories for cross-channel raiders in the Champion Stakes over the last three years.

Snow Fairy in 2012 is one of Frankie Dettori’s five previous victories in the race and, along with Golden Horn, the Italian superstar’s Group One Saturday card is also likely to include the Marco Botti-trained Euro Charline.

Ainippe, a €30,000 supplementary entry into the Matron at the latest acceptance stage, is set to represent Qatar Racing and trainer Ger Lyons.

Ten fillies remain in the Matron, with the Alain de Royer-Dupre-trained Cladocera set to fly the French flag.

The Curragh hosts a triple-Group One card on Sunday to wind up the €4 million Champions Weekend bonanza with 16 entries left in the Irish Leger, including the title holder Brown Panther and the ante-post favourite Agent Murphy from Brian Meehan’s yard.

Order Of St George, ante-post favourite for Saturday’s English Leger at Doncaster, is the sole three-year-old left in the Curragh classic.

Aidan O’Brien has half the 14 entries left in the Goffs Vincent O’Brien National Stakes, including the Phoenix winner Air Force Blue, while Jim Bolger has the option of running Sanus Per Aquam and the Futurity winner Herald The Dawn.