Curragh trainer opts for headgear for Auld Brig at Gowran 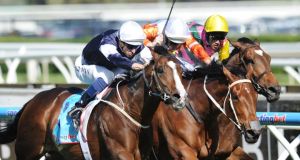 Sea Moon, winner of the 2011 Great Voltigeur and 2012 Hardwicke Stakes for Sir Michael Stoute, returned to Europe this year after a nine-race Australian career and made a good first start for Oxx when runner up to Order Of St George in the recent Leger Trial.

The seven-year-old had Kingfisher well behind him in third on that occasion and bookmakers rate his chance of following in the Currabeg Stables footsteps of Eurobird (1987), Petite Ile (1989), Kastoria (2006) and Alandi (2009) at 16-1.

“The trial should bring him on a bit and he deserves his place,” Oxx said.

Auld Brig was a 20-1 shot on his Killarney debut in July, finishing third to Foxtrot Charlie. Oxx puts first-time blinkers on for Gowran’s juvenile maiden.

The Nursery sees local trainer Tony Mullins give Lass Vega a step up to seven furlongs for the first time. Mullins’s brother Tom has a couple of decent chances: Double Fast in one leg of the apprentice handicap and Tara Dylan in the fillies maiden.