Impressive Churchill scores for Aidan O’Brien at the Curragh 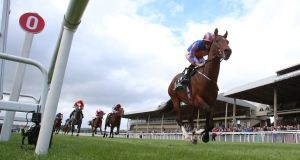 Churchill and Ryan Moore on the way to Group 1 success at the Curragh. Photograph: PA

Churchill further enhanced his already huge reputation with an impressive victory in the Goffs Vincent O’Brien National Stakes at the Curragh.

Beaten on his debut before landing the Chesham Stakes at Royal Ascot, Aidan O’Brien’s juvenile had since landed the Tyros Stakes at Leopardstown and the Futurity Stakes over this course and distance.

Sent off the 4-5 favourite for his Group One debut, the Galileo colt was always travelling powerfully in the hands of Ryan Moore as stable companion Lancaster Bomber played a pacemaking role.

Churchill made his move heading inside the last two furlongs and was swiftly followed by the Richard Hannon-trained Mehmas, the mount of Frankie Dettori.

The market principals settled down to fight it out, but it did not take long for Churchill to assert and he passed the post four and a quarter lengths to the good.

Mehmas, winner of the July Stakes at Newmarket and the Richmond Stakes at Goodwood over six furlongs, did not see out the seven furlongs as well, but just held on to second from fellow British challenger Lockheed, trained by William Haggas.

Paddy Power make Churchill their 5-2 favourite (from 6-1) for next year’s 2000 Guineas and 6-1 favourite (from 20-1) for the Investec Derby at Epsom. He is 7-2 for the Guineas with William Hill and RaceBets.

Moore said: “He’s a very exciting colt. He’s done nothing wrong his whole life and I’m sure there’ll be plenty more to come from him in the future. He has plenty of pace.

“Mehmas has won two Group Twos over six and when he came to me he found plenty.

“I think he has a big future.”

Intricately took a thrilling renewal of the Moyglare Stud Stakes at the Curragh to give Joseph O’Brien his first Group One success as a trainer.

It was very much a family affair with his father, Aidan, saddling four of the other six runners in the seven-furlong contest and it was O’Brien senior’s Hydrangea that attempted to make all under Padraig Beggy.

The pacesetter stuck to her guns when Donnacha O’Brien’s mount laid down her challenge and with nothing between the pair as they did battle in the final furlong, Intricately got the nod by a short head for a 25-1 shock.