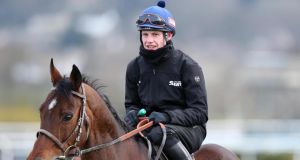 Ireland ’s sporting fortunes often revolve around a single personality: a Roy Keane or Brian O’Driscoll performing when it counts most. It’s hard not to conclude Willie Mullins fulfils that role at Cheltenham 2013.

And Hurricane Fly could signal a potential festival beano for Ireland if successful in today’s Stan James Champion Hurdle.

One leading bookmaker pricing up the likely tally of Irish winners this week makes “nine or more” an 11/10 favourite. A vote of confidence against a repeat of last year’s underwhelming total of five and reflective of a general confidence among the raiding party that we are in for a festival more akin to 2011’s record tally of 13.

But for that to happen, Mullins’s massive team surely has to fire.

Later on today, Quevega will be short odds to complete five in a row in the OLBG Mares Hurdle. Later in the week Sir Des Champs is strongly fancied to give Ireland’s champion trainer a first Gold Cup victory.

Confidence sky high
In between there are any number of outstanding young Mullins candidates. But so much still revolves around the stalwart Hurricane Fly.

Mind you, 12 months ago the sentiment was the same. Odds-on to repeat his 2011 championship success, Hurricane Fly arrived at Cheltenham with confidence behind him sky high and ran okay; like so many of Mullins’s ran okay. But okay isn’t enough here. And for most of us, third to Rock On Ruby was nowhere near enough.

This time confidence is high again, but it looks to be based on a more substantial foundation. A trio of warm-up wins instead of just one has created a belief within Mullins and Ruby Walsh, a belief that none of today’s eight opponents looks like shaking on the run-up to 3.20pm this afternoon.

That doesn’t mean there won’t be plenty willing to take the Irish favourite on. And statistically there are arguments to be made in opposing Hurricane Fly. Comedy Of Errors (1973-75) is famously the only one to regain the Champion Hurdle crown. At nine, Hurricane Fly also doesn’t fit the normal age profile. But statistics can be made to do many things. And the more concrete figures of the official handicapper tells us that only Istabraq has been higher rated among Irish hurdle stars in modern times. That’s the kind of statistic to which Mullins and Walsh pay attention.

That bookmakers rate Zarkandar as Hurricane Fly’s main threat. But Walsh passed him over in favour or his old ally and that is a tip in itself. Binocular, the 2010 title winner, was routed by Hurricane Fly in January and isn’t going to get the sort of quick ground that might encourage hopes of a reverse.

In theory then that leaves Rock On Ruby as a principal threat to Hurricane Fly’s chances of becoming just the second horse to regain the Champion Hurdle crown. Harry Fry ’s star emerged from comparative obscurity last year when proving the only one capable of overhauling the pace-setting Overturn. But it’s going to be different this time.

There is no Overturn-like tearaway now to set a frantic tempo, something likely to have been in Fry’s mind when pondering the use of blinkers on Rock On Ruby.

Headgear proved no impediment to Hardy Eustace winning back-to-back titles, but he was proven in blinkers coming here. You don’t have to be wildly imaginative to picture a lit-up Rock On Ruby doing too much too soon.

In contrast, pace seems to be irrelevant to Hurricane Fly. Possessed of the stamina to win over 2½ miles, and a Listed scorer over 10 furlongs on the flat, Walsh is happy he can ride the Irish star any way that suits. Ground is similarly immaterial.

“It won’t be that straightforward but . . . he has what you need,” is Walsh’s view. “He’s also more relaxed these days and Willie can do exactly what he wants when he’s training him.”

What most Irish punters want is confirmation that the Fly is among the all-time great Irish hurdlers and can oblige.

Jacob Murphy snatches a point for Newcastle at Wolves 19:14
Munster ring the changes again for Cardiff’s visit 19:12
Camogie: Rockett fires two goals as Waterford edge closer to quarter-finals 19:00
Dan Martin back to third in Vuelta after a wet and wild Stage 6 18:51
Meath sub Jordan Morris earns his side a late draw with Monaghan 18:23
Here is your handy guide to sport on television this week