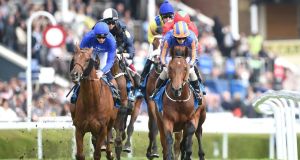 Hans Holbein leapt into the picture for the Investec Derby when giving trainer Aidan O’Brien a welcome turn of fortunes with an all-the-way success in the MBNA Chester Vase on the Roodee.

The Ballydoyle handler, winning the Group Three test for a sixth time, had seen several of his potential contenders for the premier Classic, including John F Kennedy, Ol’ Man River and Sir Isaac Newton, fluff their lines so far this season.

Hans Holbein only got his chance as Giovanni Canaletto had to miss this race after a setback and the son of Montjeu grasped it in great style as he comprehensively dispensed with his five rivals.

Ryan Moore bounced the 7-4 favourite out of the stalls and controlled things from the front, powering away to beat Storm The Stars by a length and three-quarters.

Kevin Buckley, the UK representative for owners Coolmore, said: “Ryan was told to ride him positively if there was no pace and he did.

“The horse has not run on that kind of ground before and we were very happy with the way he galloped all the way to the line — Ryan had a job pulling him up.

“That definitely puts him in the Derby picture. He saw the extra two furlongs out really well, as we thought he would.

“The horse is very honest and straightforward. Giovanni Canaletto couldn’t come here. He did and we’re very happy with that.”

Moore said: “He went round here well enough so I don’t see why he wouldn’t act at Epsom.

“It was his third run this year and he’s improved every time.”

Hans Holbein’s odds for Derby at Epsom on June 6 varies with Paddy Power and RaceBets going 20-1, while Coral, Ladbrokes and Betfred went 16-1 with Boylesports being impressed by only offering 10s.

The John Gosden-trained Maverick Wave (4-1) showed plenty of guts to hold on and win the Betfair Huxley Stakes.

William Buick set off at a good clip on the Godolphin four-year-old and fought back to land the Group Three spoils by half a length after being headed briefly in the final furlong by Cannock Chase.

Buick said: “John has brought this horse along nicely and he’s going from strength to strength.

“We’ve probably found the key to him now by going from the front. I’m sure there’s more to come from this horse.”

Collaboration (9-4 favourite) could have clinched his ticket to Royal Ascot when completing a hat-trick in the IG Handicap.

The Wolferton Handicap at next month’s premier summer festival had been pencilled in as a likely target for the progressive four-year-old and he reinforced his claims by following up wins at Windsor and Epsom with a fluent success in the hands of David Probert.

“He won well at Windsor then he went on to win at Epsom on ground quicker than ideal. He’s gone up 10lb and has come here and won on softer ground,” said trainer Andrew Balding’s wife, Anna Lisa.

“I’m sure Andrew will have a plan and I think the Wolferton was discussed before this.”

Carry On Deryck (10-1) bounced back to form by defying top weight in the Boodles Diamond Handicap.

Jamie Spencer brought the David Evans-trained three-year-old with a strong challenge score by three-quarters of a length from Billy Slater.

Trainer David Evans reported the three-year-old had been out of sorts until recently.

“A couple of weeks ago he had stuff coming out of his eye and his nose. I thought he had sinus trouble. We got the vet in and he sorted him out. He can only improve from that,” said the Abergavenny trainer.

Fergus Sweeney delivered the Martyn Meade-trained Navigate (8-1), with a rattling late surge to land the Betway Handicap by a length from the 2-1 favourite Northgate Lad.

“I was pleased with the way he coped with the track and they played into his hands by going a bit quick,” said Meade.

“He’ll probably go for another handicap and he’ll stick to six furlongs for the time being.”

The Richard Fahey-trained Young John (2-1 favourite) progressed for his debut second when coming from off the pace to take the T&L Leasing EBF Stallion Maiden Stakes by thee-quarters of a length from Rogues Galley under Paul Hanagan.

“I thought he might not be quick enough so the ground has probably helped him,” said Fahey.

“I don’t know about Royal Ascot. We’ll see if that wakes him up. He’s such a laid-back horse.”