Gold Cup could be on the horizon for Annie Power 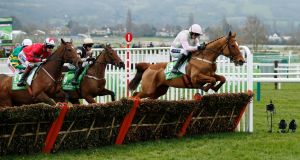 Annie Power clears a hurdle on the way to winning the Stan James Champion Hurdle at Cheltenham. Photograph: Andrew Boyers/Reuters

Annie Power had barely cooled down after her hugely emotional Stan James Champion Hurdle victory when the tantalising possibility of trying to emulate Dawn Run by some day winning the Cheltenham Gold Cup was mooted by Willie Mullins.

Jump racing’s dominant trainer, who along with jockey Ruby Walsh and owner Rich Ricci, secured an opening day 6-1 festival hat-trick, didn’t hesitate to run with the idea of equalling the legendary mare his father Paddy prepared to become the only horse ever to complete Cheltenham’s greatest double in 1986.

“I’d love to do it. When I bought her first I thought she was the nearest thing to Dawn Run I’d ever seen,” Willie Mullins said.

“Physically she’s a different colour. But she has the same size and scope. We bought her to go over fences like Dawn Run but that will be discussed. The owner has other good horses. If he wants to emulate Dawn Run, so be it. She has that speed,” he added.

That speed was obvious after Annie Power made all the running under an inspired Walsh ride to break the course record and become just the fourth mare ever to win the Champion Hurdle, leaving My Tent Or Yours and her stable companion Nichols Canyon in her wake at odds of 5-2.

What Annie Power also appears to be developing is a similar capacity that Dawn Run had to pull at the heartstrings of the wider racing public.

The mare, who sank any number of bets with her final flight Cheltenham exit in 2015, only entered Champion Hurdle calculations after her title-holding stable companion Faugheen was ruled out through injury last month.

Faugheen has an imperious ability that can generate awe. Annie Power’s previous two festival defeats, the only ones in her career, have instead generated a fallibility which only seems to have only placed her closer to many people’s affections.

“She’s a mare and that’s special,” said a tearful Ricci. “The only times she’s been beaten have been here so for her to come back is spectacular. You can have all the rest of them!”

That the rest of them on the same afternoon included Douvan’s almost casual Racing Post Arkle Trophy success, and an OLBG Mares Hurdle victory for Vroum Vroum Mag that seemed almost inevitable such was her superiority, reflects the impact Annie Power has had on her owner and many others.

“She’s brilliant. She was so unlucky last year and we copped a fair bit of flak over it. But that’s the nature of sport,” said Walsh. “I said to Willie I was going to ride her like Dawn Run - buck out and go. Not many horses as good as her have come here and not won so she deserved it.”

Amidst the near- delirium general around the winners enclosure it was Mullins who maintained a notably detached attitude which only helped quantify Annie Power’s achievement for the better.

“I had worries fitness wise before the race and that’s why the performance is so good. I think she should improve from this because it’s only three or four weeks since she ran in a slowly-run mares hurdle.

“To come here, jump out, make all and jump from hurdle to hurdle was huge. Her work was good last week but I did wonder if it was good enough to win a championship. I felt she would have to improve and she obviously has,” he said.

Mullins even admitted worry that he might have supplemented the wrong mare into the Champion Hurdle when Vroum Vroum Mag was tearing up the home gallops on the run-in to this week. Sure enough she started a 4-6 favourite for the OLBG and won easily.

“Her work last week was awesome. We thought she’d win barring traffic problems or a fall. My only worry was she might have left the race behind with that piece of work,” he said.

Douvan’s 1-4 Arkle cruise meant only Min’s failure to cope with Altior in the Supreme Novices Hurdle prevented Mullins equalling his Day One four-timer a year ago.

That success helps Altior’s trainer Nicky Henderson stay 11 winners ahead of his Irish rival in the all-time list of Cheltenham winners and the Englishman said: “We’ve always thought Altior was seriously good. I hope he’s back here next year but doing what I’m not so sure.”

Some bookmakers believe Altior can prove a live threat to Mullins’s Champion Hurdle dominance next year and make him an 8-1 shot although Faugheen remains a short-priced favourite so successfully regain his title.

“Faugheen is in good order after his injury. He could probably be ridden next week but we’ll stick to walking and you’ll see him in the autumn,” Mullins said.

By which time Annie Power might already be embarking on an evocative Gold Cup trail.