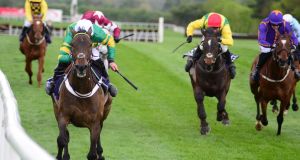 The vagaries of a jump jockey’s life were starkly brought home to Mark Walsh after a suspected broken sustained in a fall at Punchestown on Friday meant he missed out on big race glory on board Buveur d’Air.

Davy Russell stepped in for the chance ride on the former dual-Cheltenham championship hero who bounced back to form with a stylish win in the €300,000 Betdaq Punchestown Champion Hurdle.

The 2-1 joint-favourite comfortably held off two previous winners of the race, Supsaundae  and Wicklow Brave, to score for Nicky Henderson. Barry Geraghty’s broken leg sustained at Aintree allowed Walsh step in for a major success here on Thursday aboard Unowhatimeanharry.

However his leg turned for the worst when he was brought down on Scoir Mear in an earlier novice handicap chase which saw four horses exit at the fourth last fence. Walsh was left with a suspected fractured right tibia.

His misfortune turned into Russell’s opportunity and the former triple-champion jockey executed a typically patient ride on the English star.

“There aren’t many Buveur d’Air’s around and I’m just really proud to have got the opportunity to ride him,” Russell said afterwards.

“Sure, you’re going around every day of the week and there are spares flying and you don’t want to ride any of them!

“Then you get a spare like him, a dual-Champion Hurdle winner – the game is so fickle. Look, it could be my turn tomorrow. It’s unfortunate for Mark. He’s a fantastic rider. Hopefully his injury isn’t too bad,” he added.

Henderson was delighted to have secured the Corkman’s services.

“It’s lovely Davy was sitting in there with his feet up. He was always going to suit the horse and I love the way he rides. That was a proper run race and that suits this horse.

“We can to the summer now and look forward to next year when he’s the one they’ll all have to beat again,” he said.

It was a bitter end to the finest season of Walsh’s career which counted Espoir d’Allen’s Champion Hurdle victory at Cheltenham among eight Grade One wins in all. They included City Island who he’d ridden to a memorable success at Cheltenham in March.

Top amateur Derek O’Connor took his place on Martin Brassil’s star in the Alanna Homes Champion Hurdle but the 11-10 favourite rarely looked happy and he became the latest Cheltenham winner to fail at Punchestown, struggling home in sixth behind Reserve Tank.

The 13-2 winner followed up his surprise Aintree win with a half-length defeat of the Russell-ridden Sams Profile.

Joe Tizzard, representing his father, Colin, said: “He had terrible ulcers over Christmas and we gave him three months off. He has just improved and improved since. He could be anything. That was a lovely performance. He looks like he’s got chaser written all over him and he could be better over a fence.”

O’Connor had better luck filling in for Walsh in a later novice hurdle as Gardens Of Babylon carried JP McManus’s colours to victory and doubled up in the City Island colours aboard Longhouse Poet in the bumper.

Walsh wasn’t the only jockey in the wars on Friday’s ‘Ladies Day’ programme. David Mullins was one of the four fallers in the novice chase, from Pravalaguna, and was stood down for the day with a reported shoulder problem.

The attritional nature of the jockey’s life was emphasised again in the following race won by Moyheena when Rachael Blackmore fell at the second last from Ellie Mac and was stood down afterwards.

“Rachael Blackmore is fully conscious and has been taken to hospital as a precaution for observation,” said the Irish Horseracing Regulatory Board’s senior doctor, Jennifer Pugh.

An excellent day for the visitors continued in the Champion Hunters Chase when last year’s winner Caid Du Berlais proved uncatchable from the front under jockey Will Biddick.

1 No Masters, so Tiger Woods battles son Charlie for green jacket
2 Conor McDonald: ‘People in fitness industry need to be careful what they put online’
3 Germany well ahead of the curve as Bundesliga gears up for return to action
4 America at Large: Hurling fan Dowling leading the fight against Covid-19
5 Spectator sues Tiger Woods and his caddie over incident in 2018
Real news has value SUBSCRIBE