‘Hey Ruby, hold her back’: An emotional Punchestown goodbye 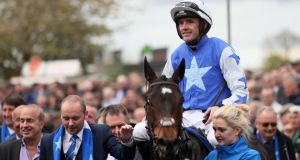 Grown men crying is far from unusual in a winners’ enclosure but this was different. At Punchestown, men struggled to cope with their emotions at news of Ruby Walsh’s retirement.

“You’ll never see me on a horse again – I’m finished,” said the Co Kildare jockey, to his home county crowd that erupted in applause and cheers for one of the most skilled individuals ever to climb up on a horse.

“That’s it – it’s all over,” Walsh repeated, puncturing the disbelief of the public interviewer and the crowd behind him after the 39-year-old steered Kemboy to win the Punchestown Gold Cup.

The shock in the crowd morphed into loud applause and cheers as the 12-time champion jockey – two weeks shy of his 40th birthday – posed for photographs with his wife Gillian and daughters Isabelle, Elsa and Gemma.

His father Ted, the trainer and broadcaster, managed to make his way through a melee of press photographers rushing to capture the passing of one of the greats of Irish horseracing into retirement.

Emotions ran high within the Walsh clan and among the crowd that gathered around them. Elated members in the huge syndicate that owned Kemboy, decked in blue scarves, attempted to hug the jockey as he worked his way through the crowd.

Christy Moore may have to write another verse to his Ballad of Ruby Walsh to make sense of these dramatic scenes.

“Hey Ruby, hold her back, give her the craic and up she’ll go.”

‘Out of the blue’

As he posed for photographs at the barrier of the winners’ enclosure, fellow jockeys Davy Russell, who rode this year’s Aintree Grand National winner Tiger Roll, and Paul Townend, winner of the Cheltenham Gold Cup on Al Boum Photo, dowsed Walsh with buckets of water meant for the horses.

After the career he had, Walsh will need time to cool off. He won everything that could be won in jump racing.

During a 24-year career spanning more than 2,500 winners, the Kill native won two Aintree Grand Nationals and two Cheltenham Gold Cups. He won a record 59 winners at Cheltenham and was the National Hunt racing festival’s champion jockey 12 times, the same number he was Irish champion jockey.

He went out on Wednesday as he had spent most of his career, on a winner.

It certainly an expressive victory as he gestured to the crowd at the Co Kildare track as he crossed the finish line. This was a wave goodbye rather than a victory punch.

Talk had circulated that Walsh might be calling it a day as he led Kemboy into the winners’ enclosure. A beaming Ruby pointed a knowing finger at dad Ted in the RTÉ commentary box as the horse walked in.

Walsh had kept the news secret from even those closest to him. Willie Mullins, who trained Kemboy and so many of the winners Ruby brought home during his career, said that news came “out of the blue, totally”.

The Co Carlow trainer said the r-word was never discussed, not for horses or humans, but “the penny dropped” when Walsh asked him if he could find another rider for the day’s penultimate race.

“It’s the end of an era,” said Mullins, describing Walsh as “just a natural jockey”.

“He just rode races naturally from the first day I put him in Leopardstown as a 16-year-old rider,” he added.

Walsh choosing to go home for good at Punchestown, the home of Irish National Hunt racing, with a victory in the day’s biggest race was fitting for a man who grew up a couple of steeplechases away.

Earlier, one well-known Kildare punter, former finance minister Charlie McCreevy, recalled how they used to close schools, offices and banks for the racing at Punchestown. “It’s Kildare’s festival,” he said.

Businessman Mike Maloney, who along with brother Barry, won the fourth race with their horse Minella Indo evoked the memory of his late father, a local, after their victory.

“He loved this place. This is where he grew up as a kid. They got off school when it was a two-day festival. We are thinking of him today,” he said.

Kildare has been a lucky county for another punter at Wednesday’s festival, golfer Lee Westwood. He won the European Open twice at the K Club where he also won the Ryder Cup with Europe.

“It’s a great part of the world; I always like coming back here,” he said.

No doubt Walsh will be back too in a different role, maybe following his father as a trainer.

Give her a crack, Ruby. Here, they’ll want you back.