Faugheen to succeed ‘The Fly’ in Champion Hurdle 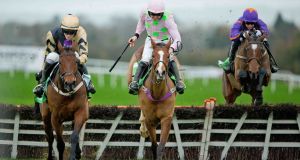 Nichols Canyon clears the last ahead of Faugheen and goes on to win the Morgiana Hurdle in November, Faugheen’s only loss in 12 races. The pair clash in Sunday’s Champion Hurdle. Photograph: Morgan Treacy/Inpho

Critics who label Irish jump racing as little more than a Willie Mullins show can to an extent justifiably point to Sunday’s BHP Irish Champion Hurdle as another example of the trainer’s dominance, but no way can another clash between Faugheen and Nichols Canyon be dismissed as academic.

Rather it is the earlier Frank Ward Solicitors Arkle, and Douvan’s overwhelming presence in a three-runner €90,000 Grade One, that promises to be an aesthetic rather than betting proposition for the vast majority.

Faugheen will be a heavy odds-on favourite too, but it won’t just be coincidence punters, hoping his 13th racecourse start coincides with defeat on a first race at Leopardstown, who will be intrigued by the race to succeed Hurricane Fly in the €110,000 highlight.

The retired hero brought the house down last year when eclipsing Istabraq with a five- in-a-row in Ireland’s most prestigious hurdles prize, and will be back at his old stomping ground to parade at a track where he was famously unbeaten in 10 starts.

Whether or not Faugheen’s sole defeat to date was a once- off fluke could theoretically be answered at home on Mullins’s gallops, but far better for everyone, and more conclusive, not to mention profitable, that is should happen here.

With both Plinth and King Of The Picts both triple-figure outsiders, this is a resolutely Mullins show, although with even those closest to the top-class trio topping the Cheltenham betting for March eager to find out where the principals stand.

Arctic Fire may be rated closest to the favourite, but he has twice failed to beat his stable companion. It is Nichols Canyon’s half- length defeat of Faugheen in November’s Morgiana that injects intrigue into the weekend feature.

On figures, Nichols Canyon remains a stone inferior to his rival. However, he is the sort of dogged battler whose capacity often fails to be quantified by mere figures: Faugheen may be more flash, but it is grit not glamour that gets you past Nichols Canyon.

Since these Grade One events are designed to test top- class credentials, this race promises to serve its purpose in spades, no matter the size of the field or the exclusivity of the connections involved.

It will certainly be a tactically fascinating battle between Ruby Walsh and Paul Townend, in turn leaving Danny Mullins in an enviably under-the-radar role on Arctic Fire.

Even if Faugheen gets the front, it’s unlikely to be any kind of solo. In many respects, despite a dozen previous starts, including a pair of Cheltenham victories, this could be the biggest test of his career to date. If he can beat Nichols Canyon in style, then the throne previously occupied by “The Fly” will be filled by a worthy inheritor.

Since Mullins has described Douvan as being as fine a talent as he’s had through his hands, even forecasts of a 1-14 SP won’t prevent intense interest in his third start over fences.

He turned the St Stephen’s Day Grade One into a rout, and anything but a similar display of dominance will be a surprise as Douvan continues his imperious progress to Cheltenham’s Arkle.

The slow pace in the Grade One won by Long Dog was all against Jessica Harrington’s runner here at Christmas. Woodland Opera faded to last then, but the step up to 2½ miles should suit admirably and the form of his maiden defeat of Coney Island looks smart.

A Toi Phil is the Mullins hope in this, but Harrington should know where she stands with him through a line with Don’t Touch It, who goes in the opening maiden.

Gigginstown’s latest bumper recruit, Village Mystic, is likely to be tough to beat in the finale.

Eiri Na Casca appreciated two miles at Naas on her last start and even an 11lb hike in the ratings brings her in off bottomweight in the handicap chase. On testing ground that can prove crucial.