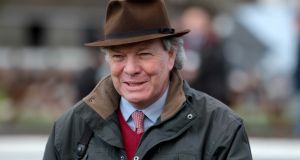 It will be a poignant moment at Punchestown on Wednesday should the Edward O’Grady-trained The West’s Awake win.

The horse is set to line up for a novice chase a day after O’Grady’s late wife, Maria, was laid to rest after sustaining fatal injuries in a hunting accident on Saturday.

There has been overwhelming goodwill within racing towards the O’Grady family in recent days and that will manifest itself again through The West’s Awake’s appearance.

The Sue Magnier-owned horse hasn’t run in almost two months since finishing third in a Grade Three at Tipperary but prior to that had won twice in five days at Limerick during the summer.

He has only four opponents at Punchestown and the greatest threat could come from Tout Est Permis – a Drinmore Chase entry on Sunday – who gets a valuable weight for age allowance.

On Wednesday evening at Turf Club HQ, claiming jockey Barry John Foley is due to appeal the severity of a 21-day ban given to him at Cork last week under ‘Non-Trier’ rules.

Foley finished seventh in a maiden hurdle on the Mick Winters-trained Churchtown Glen who was subsequently suspended from racing for 90 days.

Winters was also fined €6,000 under the most severe penalties handed out since the new Rule 212 came into force over ten months ago. Winters is appealing the fine and the horse’s suspension.

Foley could get a pre-appeal boost at Punchestown on board Golden Firepower who can step up with the aid of first-time cheek-pieces in a handicap hurdle.

Paloma Blue found only the ill-fated Fayonagh too good in last Spring’s Champion Bumper at the track.

On the back of that, his first start over hurdles at Naas earlier this month was disappointing. Paloma Blue’s jumping looked to let him down and he finished only third to Next Destination.

Owner Chris Jones and the season’s leading jockey Davy Russell combined to win Sunday’s Troytown with Mala Beach and Paloma Blue could be a much sharper prospect now for Wednesday’s opener.

Bon Papa has always shaped as a prospective chaser and can get off the mark first time of asking in the Beginners contest.