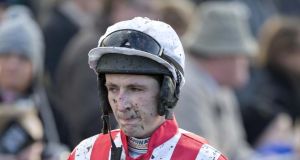 The James Lambe trained Yachvili was pulled up by O’Connell in a steeplechase in September 2011 after which the internet exchange firm Betfair alerted the Turf Club. Betfair alleged two UK based individuals placed a “lay” bet of £10,000 sterling on Yachvili not to finish in the first three. Betfair paid out on the successful bet but said their records showed the amount gambled was much greater than the individuals had ever gambled before.

Last month both O’Connell and Lambe failed in a High Court legal challenge against the Turf Club and their entitlement to enforce the rules of racing.

Co Armagh-based Lambe was yesterday cleared of all charges by the Turf Club but the regulatory body imposed the most severe punishment handed out to a jockey in Ireland in modern times. Monasterevin, Co Kildare, based O’Connell (24), a professional rider since 2009, has a week in which to lodge an appeal against the punishments which also include him being ordered to pay €10,000 towards Turf Club costs into the investigation.

Official findings
The Turf Club was not issuing official findings on the matter yesterday as it is attempting to contact three UK based individuals who did not attend yesterday’s hearing at the regulatory body’s HQ at the Curragh. Those findings are expected to be revealed later this week.

O’Connell was found to be in breach of two rules of racing relating to taking all reasonable measures to insure a horse achieves its best possible position in a race and to the requirement to avoid corrupt or fraudulent practises.

The jockey’s solicitor, Andrew Coonan, said yesterday: “Obviously Eddie is very disappointed at the outcome and considering his options including his entitlement to appeal. It has been a difficult time for him personally.”

O’Connell rode 18 winners in the last National Hunt season which wound up earlier this month, putting him just outside the top 20 most successful jump jockeys in the country.

Yesterday’s verdict is another blow to racing’s image on the back of charges against two trainers, Philip Fenton and Pat Hughes, relating to possession of unlicensed medicines, including anabolic steroids.

The punishment handed out to O’Connell is a landmark one in terms of the severity of a penalty handed out by the body in charge of regulation in Ireland. The possibility of other serious penalties being handed out hasn’t been ruled out.

1 Rory McIlroy puts integrity ahead of glory in US PGA second round
2 Lionel Messi waves his magic wand again to guide Barça past Napoli
3 Bayern Munich complete formalities with rout over Chelsea
4 Sporting Cathedrals: Semple Stadium, the very centre of the hurling universe
5 Buttler and Woakes drag England from the brink to set up thrilling Pakistan win
Real news has value SUBSCRIBE