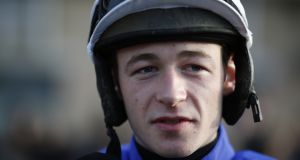 David Mullins has his eyes set on a first festival success after continuing his strong campaign at Naas. Photo: Getty Images

Ruby Walsh has the pick of most of Willie Mullins’s hugely powerful Cheltenham squad but a 59-1 double by David Mullins at Naas on Sunday could prove a timely boost to the young rider’s chances of picking up some enviable festival ‘spares’ from his uncle.

The 19-year-old famously remains the only rider ever to lower Faugheen’s colours and he has continued to build on the momentum of that Morgiana shock by Nichols Canyon last November to cement his place in the top-10 of the jockeys table.

A pair of winners for Curragh trainer Sandra Hughes, including the Grade 3 novice chase victor, Sub Lieutenant, has brought his tally for the campaign to 36 and now his sights will turn towards a possible first festival success.

Even with Faugheen and Arctic Fire ruled out of the Champion Hurdle, Willie Mullins still has the ante-post favourite Annie Power and assuming Paul Townend is reunited with Nichols Canyon at the festival, Sempre Medici could wind up a potential spin in hurdling’s championship for the trainer’s nephew.

As he showed on Nichols Canyon in the Morgiana, Mullins can be tough to pass once given his own way in front and he proved the point again on Sub Lieutenant.

The outsider of a Gigginstown Stud trio, which saw Tell Us More start a 13-8 favourite, Mullins gave the previous maiden over fences a decisive drive and they had two lengths to spare at the line.

“He was very sweet in front. The visor helped, as did the little bit better ground. Once he can dictate, and he isn’t bossed around he is very good. He just has his own way of doing things. It’s great to get David: he’s a very good rider,” said Sandra Hughes.

The trainer has a number of Cheltenham possibles, including the World Hurdle contender Lieutenant Colonel , but is already looking further ahead to Liverpool with Sub Lieutenant.

“He ran very well in Aintree last year. I’ll speak to Eddie and Michael (O’Leary) but I wouldn’t mind going to Aintree with him,” she added.

Hughes and Mullins doubled up in the following handicap hurdle as Total Recall justified some pre-race confidence.

“We fancied him if he settled. He’s a chaser in the making and just lacks a gear but he’s an ideal ride and could pop up in a big handicap somewhere,” Mullins reported.

Ruby Walsh remains stuck on 99 winners for the season after a blank day which wound up with the champion jockey getting turned over on the odds on favourite Call It Magic in the three mile maiden hurdle.

A Genie In Abottle stayed on too strongly for Walsh’s mount and reinforced Noel Meade’s view that the Gigginstown owned horse is a potential top-notcher over fences.

“I didn’t see him as a novice hurdle horse, or a winners bumper horse. He isn’t quick but he keeps going and if he takes to fences I could see him getting to top graded company over a trip,” Meade said. “A fence could be worth two lengths to him every time as he’s so big and long.”

Gigginstown secured a hat-trick on the day as Shattered Love emerged best in the bumper, under 16 year old jockey Luke McGuinness, completing a double for trainer Gordon Elliott who’d opened the day with Listed Hurdle success for Sutton Place.

The JP McManus owned winner was the 12-1 outsider of the field but won decisively from Royal Caviar.

“I thought it would be a big step up for him but he’d a very good first run at Navan and is obviously improving. He looks a proper horse for the future,” Elliott said.