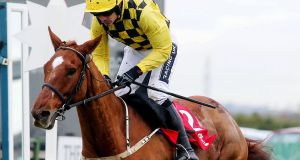 Ruby Walsh on board Melon. Can Faugheen’s young stable companion be a potential gate-crasher for the Champion Hurdle? Photograph: Jonathan Porter/Inpho

If Cracking Smart can land Navan’s Grade Two feature on Sunday it will leave Gordon Elliott and Michael O’Leary with an impressively tight grasp on the ante-post betting for Cheltenham’s three top novice hurdle prizes.

Despite the Ryanair boss’s best efforts to downplay ever burgeoning hype around Samcro, the horse undisputedly retains the aura of a long-term great-white-hope for O’Leary’s Gigginstown Stud team.

But any disappointment at Samcro skipping this weekend’s Navan Novice Hurdle has to be placed in the context of the remarkable strength in depth his owner and trainer possess in terms of young talent.

Samcro is already a 2-1 favourite for the Ballymore Novices Hurdle at Cheltenham despite having run in nothing better than a Grade Three so far.

In contrast, his stable companion Mengli Khan has already got a Grade One in the bag courtesy of the Royal Bond earlier this month, and he tops the Supreme betting for Cheltenham.

Cracking Smart is disputing favouritism for the festival’s other Grade One novice event, the Albert Bartlett, and if he can score impressively on Sunday there will be no disputing the Elliott-O’Leary team’s entitlement to think big about March.

Plenty can change in a dozen weeks, of course, and much of the sport is already rigidly focussed on the upcoming Christmas festival action. Yet the long-term Albert Bartlett picture could be determined to a large extent by Sunday’s race, with Next Destination also in the line-up.

Nicky Henderson’s On The Blind Side is the only market leader absent, and there’s even an intriguing element provided by Jetz, who chased home Samcro at the track on his previous start. If Jetz wins the hype machine around Samcro could crank up another notch.

In Jetz’s favour is that his trainer, the new Irish Times Sportswoman of the Year, Jessica Harrington, is the last handler apart from Elliott and Mullins to supply the winner of this race, albeit that was all of seven years ago with Oscar’s Well.

Another of her novices, Someday, chased home Next Destination at Naas a month ago, and although the Mullins runner was undeniably impressive, the bare form hasn’t been exactly advertised since.

Quite a lot of dreams would be invested in Cracking Smart’s two stable companion, Poli Roi and Delta Work, were they trained by almost anyone else. However, the power of the Elliott-Gigginstown alliance has the pair, for the moment at least, firmly in supporting roles.

And if Cracking Smart improves his jumping the novice scene could look like one where everyone else is in the wings too. On testing ground the drop back from three miles shouldn’t be an issue, and the form of his easy defeat of Fabulous Saga on that occasion looks impressive now.

With Paul Townend serving a four day-whip ban, David Mullins takes the reins on Next Destination, and will also be on board Melon when that horse attempts to step up to the big time at Cheltenham on Saturday.

The Champion Hurdle picture is dominated by the last two title-holders, Faugheen and Buveur D’air. But if there’s a potential gate-crasher the bookies reckon it’s Melon.

Faugheen’s young stable companion is a 14-1 third favourite for March, but looks to face the most substantial test of his young career to date in the Unibet International Hurdle.

What Melon has achieved in four starts to date doesn’t correspond to his reputation. However, considering he is almost a stone wrong ratings-wise with the fading but still splendidly consistent My Tent Or Yours, and has another veteran to cope with in The New One, there will be no hiding place here.

If Melon can beat them in impressive fashion then the Champion Hurdle focus might have to widen significantly to include a young pretender.

It is Danny Mullins who will do the steering on four of his uncle’s Fairyhouse runners on Saturday.

One of the most interesting Fairyhouse contenders will be Giant Spring who has a first start for Willie Mullins in the second of the maiden hurdles.

This one achieved a 123 rating for his former trainer Sandra Hughes, but still emerged as a frustrating sort overall last season. Many will no doubt be prepared to invest in Mullins’s capacity to step Giant Spring up.

Stormy Ireland brings jumping form from France and should score in the three-year-old hurdle, while Colreevy can help make it a super-Saturday for the Mullins team in the bumper.