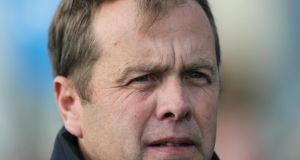 Chopin trainer Ger Lyons, who is based in Co Meath. Photograph: Inpho

influence of Sheikh Fahad Al Thani within Irish racing can be further advertised by German import Chopin in Leopardstown’s Heritage Stakes. Qatar Racing has moved the five-year-old from Andreas Wohler to Meath trainer Ger Lyons, whose Capella Sansevero is on a lengthy list of potential 2015 classic contenders owned by the Sheikh, who is a member of the Qatari royal family.

Plans are also in place for the Sheikh to take part in a charity race in aid of ‘Irish Injured Jockeys’ – of which he is a patron – at Limerick on Saturday week, an unfortunately timely event considering Robbie McNamara fall last week.

Three runners will carry the Qatar colours at Leopardstown today but Chopin is the most interesting, boasting a 112 mark that gives him a ratings edge over the in-from Dermot Weld’s Fascinating Rock, and a proven ability to act on soft ground, which isn’t the case with Aidan O’Brien’s Cougar Mountain.

Qatar’s spokesman David Redvers is playing down expectations. “Ger’s horses have just been needing a run, so we’re expecting a promising run rather than expecting him to come back with a trophy,” he said.

Ryan Moore will be on board Ballydoyle’s The Warrior at Newmarket but Joseph O’Brien can make 9.5 for a trio of horses trained by his father, with Hans Holbein looking the most interesting of them in the 10-furlong maiden.

Both the O’Brien and Weld teams have two runners in the opening mile maiden, and with the Curragh trainer in such blinding form the Oasis Dream colt Gulf Of Poets will be a centre of attention.

John Oxx has yet to hit the mark this year but Corbata looks another topweight that could be hard to beat.

Bryan Cooper returns to action at Limerick with two rides that look to hold leading chances.

Turnandgo returns from 17 months off, and is now with Mouse Morris, but if he’s anything like the horse that won two bumpers, and started odds on to beat The Tullow Tank in a maiden hurdle, he’ll be hard to beat.

With Davy Condon on the sidelines, Cooper comes in for the ride on the Clonmel winner Jo Go and they look to be leading players in the mares handicap hurdle.