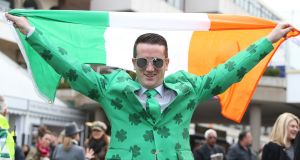 Mark Gibson from Dublin at the opening of the Cheltenham festival. Photograph: Inpho 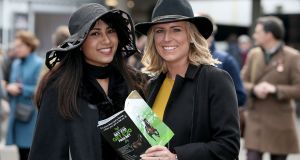 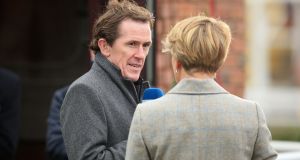 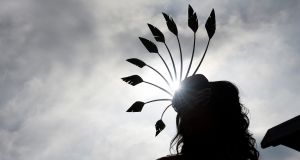 A punter stands in the sun as she waits for the horse racing to start. Photograph: Reuters 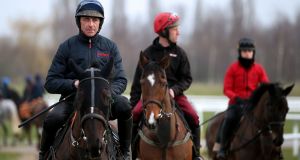 The annual Irish invasion of the Cotswolds was well under way on Tuesday morning as tens of thousands of early comers to the Cheltenham racing festival basked in unseasonably warm March sunshine.

Hours before the first of the day’s seven races was set to get under way, the Guinness Village was thronged with punters who had crossed under the Céad Míle Fáilte sign at its entrance to begin the party without delay.

Cheltenham racecourse estimates that 265,000 pints of the black stuff will be consumed during the four days of racing that make up The Festival, as it is officially known.

But the range of accents in the village zone on Tuesday morning – English and Scottish being as prevalent as Irish – underscored the fact that others know how to party too.

Keeping well away from the beer at this early stage were two friends from Tarbert, Co Kerry, Frank Wall and Des Murphy, two Cheltenham veterans who have been coming to the festival for about 25 years, and were to be found by the parade ring with takeaway coffees in their hands.

“We don’t do the dog on it anymore,” said Mr Murphy.

Mr Wall confesses to being “in love” with Annie Power, a revelation that might get a man into trouble were it not for the fact that she is a racehorse.

The Willie Mullins-trained mare provided perhaps the most dramatic moment of last year’s festival, coming down at the final fence of her race – and saving bookmakers an estimated £50 million in the process.

Mr Wall was among many Irish punters hoping that the horse could make up for that blunder by winning the feature race of the first day, the Champion Hurdle.

His other big hope of the week is another trained by Willie Mullins, Roi Des Francs, which is to run later in the week.

Mr Murphy was making no predictions about the week. “There’s an awful lot of good horses here”. After Cheltenham, the two will set their sights on the Galway Races in August and note they have not missed a meeting for more than 40 years.

The two friends are among a huge Irish contingent at this week’s event. Ryanair alone was due to bring 20,000 Irish racing fans to the festival, having laid on 30 extra flights for the week.

Some 130 Irish horses will be competing against the best steeplechasers and hurdlers in Britain through the week.

Much of the attention on the first day was whether Ireland’s top trainer, Willie Mullins, could repeat his remarkable feat of having four winners on the opening day a year ago.

But other Irish trainers, Henry de Bromhead and Gordon Elliott among them, also had hopes of a first-day appearance in the winner’s enclosure.

The Offload: James Ryan chuffed for Leavy and his new puppy 10:00
Harry Gregg: a reluctant hero and a revered shot stopper 07:51
Hero of the Munich air disaster Harry Gregg dies aged 87 07:42
Wins for Wexford, Cork and Clare; Ireland to name updated squad for England trip 07:20
Dublin overcome the elements and Carlow 06:00
Here is your handy guide to sport on television this week