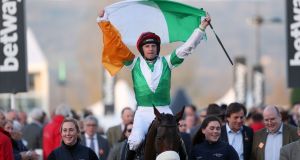 Jamie Codd celebrates winning the Weatherbys Champion Bumper on Fayonagh to secure a double on the second day of the Cheltenham Festival. Photograph: David Davies/PA Wire

The in-form Gordon Elliott combined with top amateur jockey Jamie Codd for a Cheltenham festival double on Wednesday that took his haul for the week so far to five winners.

Victory for Cause Of Causes in the Cross-Country was a sentimental favourite but perhaps it was Fayonagh’s astounding success in the Champion Bumper that testified to Elliott’s red-hot form which has some bookmakers already paying out on the leading trainer award.

With Jessica Harrington’s Supasundae adding to Special Tiara’s Champion Chase victory for Henry de Bromhead it was a second day in a row of four Irish-trained winners and it leaves the raider with an 8-6 lead over the home team at the festival’s halfway point.

Whatever else happens though it must be odds-on about a more unlikely success than Fayonagh’s. After blowing the start, and racing in last for most of the trip, the 7-1 shot sliced through the field in startling style to nab the gallant runner-up Debuchet in the final strides.

“I thought it was game over at the start,” Codd admitted. “It’s all down to the mare’s ability. I was last all the way, and barely hanging on. But when she saw daylight she quickened, and then quickened again.”

Elliott was hugely impressed and added: “The turn of foot she showed in the last furlong was unreal. The week has been unreal so far, and we’ll just keep trying.”

Persistence has never been an issue for Cause Of Causes either and he became just the fourth horse to win three different races in festival history by battling to success over his stable companion, Bless The Wings.

“He’s a remarkable little horse, so durable. He’s been second in the Kim Muir, won the four-miler, came back for the Kim Muir and now this,” said Codd. Elliott nominated the Grand National as a possible target for the JP McManus-owned winner next.

He knows better than most the power of momentum and Coral Cup glory for Supasundae stirred a big dollop of it into Sizing John’s Gold Cup chance later in the week.

With the ‘New’ course being watered overnight, hopes are growing that Harrington’s first ever runner in steeplechasing’s ‘blue riband’ could prove a winner on Friday.

It had been six years since Sizing John’s jockey Robbie Power had his only previous festival winner but Supasundae ended that unwanted streak in style.

“He has travelled over to give Sizing John a bit of company. He’s best mates with him,” grinned the jockey. “It’s great to get one – fingers crossed we get another!”

Like Sizing John, Supasundae was part of a contingent of Alan Potts-owned horses moved to Harrington from De Bromhead and his new trainer admitted: “I’ve taken time to get to know him. He is flat bred and really loved that ground.”

Tombstone started a well backed 7-2 favourite for the Coral Cup but managed to beat only one horse past the line.

Earlier, Nico de Boinville got out of jail with a dramatic RSA victory on Might Bite, who somehow rallied to nose out his stable companion Whisper.

After making most of the running and looking a sure winner, Might Bite stuttered over the final fence and hung alarmingly right towards the stands with his desperate rider flailing to little effect.

Rather than the rapidly overhauling Whisper it was a loose horse in front of him that Might Bite seemed to take aim at and he resumed his wayward course to victory just in time.

“Without the loose horse I wouldn’t have won,” the jockey admitted. “He’s a thinker, but so talented. He should have won five or 10 lengths.”

Willoughby Court beat the hot favourite Neon Wolf in the Neptune, a race where Mark Walsh was stood down with suspected concussion after a fall from the fatally injured Consul Du Thaix at the fifth.