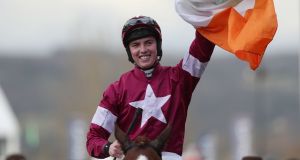 Blow By Blow just about summed it up.

Not only did the appropriately-named winner of the penultimate event of the 2018 Cheltenham Festival describe the relentless sequence of Irish successes, he allowed Gordon Elliott to best Willie Mullins in what had become a private battle to become the king of the meeting.

The 11-1 victor of the Martin Pipe Conditional Jockeys’ Handicap Hurdle was Elliott’s eighth winner of the four days, and it equalled Mullins’ highest ever score at Cheltenham to pip him by one.

It was made all the more impressive by the fact that Elliott had drawn a blank on Tuesday and his final triumph would rank highly amongst his total as the iconoclastic trainer whom the race was named after is the 40-year-old’s mentor and hero.

“I wanted to go home on Tuesday when a few of our fancies got beat,” Elliott said. “I gave it a good kick Wednesday, then had an early night last night.”

There was a knowing look about which option he might take that evening.

“You are always hoping you’ll train one or two but eight winners is unbelievable. It’s happy days. We knew the horses were well at home, it was just whether they were good enough.”

Whilst Mullins is from a famous racing family, Elliott is something of an upstart in this profession. Self-described as being barely able to read or write, he had only a handful of horses when causing a surprise in the Grand National a decade ago.

Now he has a smart complex in Co Meath full to bursting with expensive recruits, many belonging to Michael O’Leary, owner of six of his winners.

“His is a remarkable story,” O’Leary said. “Everyone says it’s very hard to make it as a trainer in Ireland and he did it from nothing by taking bad horses over here and winning, driving his own box to Ayr. He obviously has very good staff, but he learned from the master in Martin Pipe.”

Elliott also continues in his quest to usurp perennial champion Mullins in the domestic scene and currently edges him by a winner and just under €400,000. He had a similar lead into last year’s Punchestown Festival only for his rival to turn it around in the final embers of the meeting.

The damage had been done but the British contingent salvaged a trace of respectability after a battering by the visitors which might yet resume at Twickenham today, with Native River thwarting Might Bite in the Cheltenham Gold Cup, and 17 winners meant Ireland fell just short of last year’s record tally of 19.

Davy Russell was top jockey but O’Leary, who was the leading owner, was taking nothing for granted.

“There’s so much talent in Ireland, we’ve seen what Davy Russell can do at the age of 38, and Jack Kennedy is clearly one of a new group of young riders in Ireland but they’re very fortunate.

“A lot of the best horses are now being kept in Ireland by JP McManus, Rich Ricci, myself and others. This is a golden era in Irish racing but sadly this will turn, I remember 50 years ago we could only get one winner in Cheltenham.”

The point is salient in terms of equine talent, illustrated sharply by the Tattersalls sale after racing on Thursday. It was the sort of event which would have appeared designed to allow the well-heeled – or perhaps well-lubricated – British clientele to splash out on an exciting Irish prospect whisked straight from the point-to-point field to market.

The most expensive four horses of the auction will be be trained in Ireland by Elliott and Mullins, and most likely belonging to those same elite owners, with the younger man taking the joint two top lots at £330,000 apiece.

There is a feeling that all this glory does paper over the cracks to some extent; during this year’s festival only Henry de Bromhead and Pat Kelly have struck for the remainder of the Irish trainers, with long-established names such as Noel Meade, Mouse Morris and Jessica Harrington rarely in contention.

As O’Leary suggested, the tide may turn again. One imagines Gordon Elliott will be happy to maintain his current course.