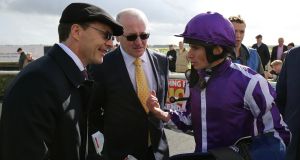 Capri gave Aidan O’Brien his 16th victory in the Juddmonte Beresford Stakes when leading home a one-two-three for the Ballydoyle trainer at the Curragh.

The Galileo colt had to work in the tough conditions to complete a hat-trick, but he ground it out well to complete a quick Group-race double for O’Brien and jockey Ryan Moore after The Happy Prince in the Renaissance Stakes.

Escape Clause and Exemplar took the six-strong field along until the latter went on, but his stablemate Capri soon ranged alongside and the 8-11 shot asserted to score by three-quarters of a length.

Yucatan stayed on stoutly to pip Exemplar for third place in what proved an O’Brien stable benefit.

Capri was cut to 10-1 from 16-1 for the Investec Derby with Paddy Power behind his stablemate Churchill, the 6-1 ante-post market leader. RaceBets and Coral went 12-1 from 16-1.

O’Brien said: “I was very impressed with all three colts. They went a nice pace and came up the middle so they had to learn.

“Capri is a nice moving horse and should prefer better ground. All three should definitely get a mile and a quarter, and if they are good over that they should get a mile and a half. They are all bred for it.

“Ryan was very happy. He kept quickening and was surprised they came with him.

“Next week could be a bit quick for them to run again, but we certainly will look at the Racing Post Trophy for all three.

“You learn the same as we do when we run them against each other. Sometimes we get surprised and sometimes not.”

Earlier The Happy Prince recorded his first Pattern-race success when running out a smooth winner of the Renaissance Stakes.

The four-year-old had shown he was capable of winning at a high level when only beaten a short head in the Group Two Park Stakes at Doncaster recently.

The 11-4 favourite put that experience to good use in this Group Three over six furlongs as he defeated Flight Risk by three-quarters of a length in the testing conditions.

The Henry Candy-trained La Rioja ran a creditable race and was just a nose away in third.

The winning trainer (O’Brien) added: “He’s definitely improving. Ryan said he would have no problem going back to five furlongs as he has plenty of speed.

“He’s more straightforward and is really enjoying it now.”